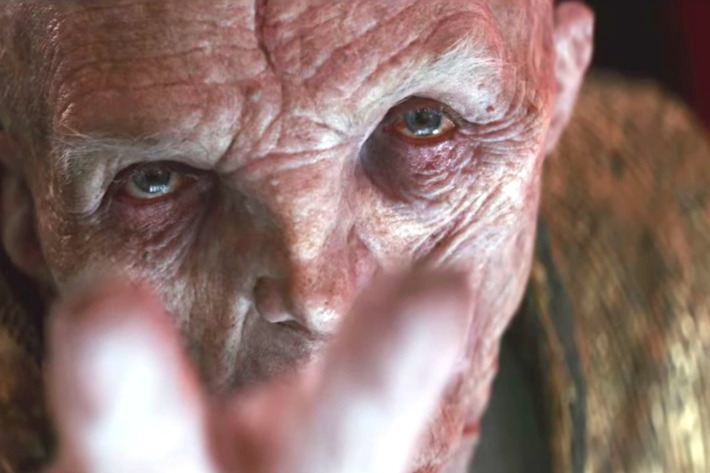 Look, it’s Star Wars, so you never know how life, or whether life can be come back to or not. Whether you can be resuscitated or brought back. I was shocked. Dramatically, it felt absolutely right for that moment in the film, so I didn’t question it. I just think it’s a very, very important scene, so I didn’t question it. But I do, I know it’s left fans feeling like, that they were really searching for something there. And what I’m saying is, who knows?
-Andy Serkis

Apparently Andy Serkis hasn’t spoken to J.J. Abrams quite yet about Snoke’s possible return, but it seems that he would at the very least be interested in reprising his role. In a snippet from the Black Panther junket, Andy Serkis indicated the above, citing fan’s reactions as a possible reason for Snoke’s disappearance.

There are many different ways for Snoke to come back on screen. In the popular fanfiction the Signs and Smoke Signals trilogy that shared some eerie similarities to The Last Jedi, Snoke is killed off, only to appear later, surprising everyone when it’s revealed that he has managed “Force Possession” and taken over Hux’s form.

Considering how many people had a hard time swallowing Force-Skype and Force Projection, it seems that Force possession is something that many fans won’t look forward to, but it could be a good way to bring Snoke back without explaining how they literally had to stitch Snoke back together.

But if that’s the case, it looks like we unfortunately won’t get to see Andy Serkis return to finish up his role in this trilogy. Either way, it looks like J.J. has his work cut out for him, with both Snoke and Captain Phasma currently believed dead. With two crucial elements of the First Order gone, will they be able to stand a chance against the Resistance?

Only about two more years until we find out!