With hotshot Rebellion pilot Poe Dameron captured by pirates, it’s up to BB-8-and Rapier Squadron-to save the day! The first of three issues spotlighting the Sequel Trilogy! Variant cover by Stefano Simeone!s 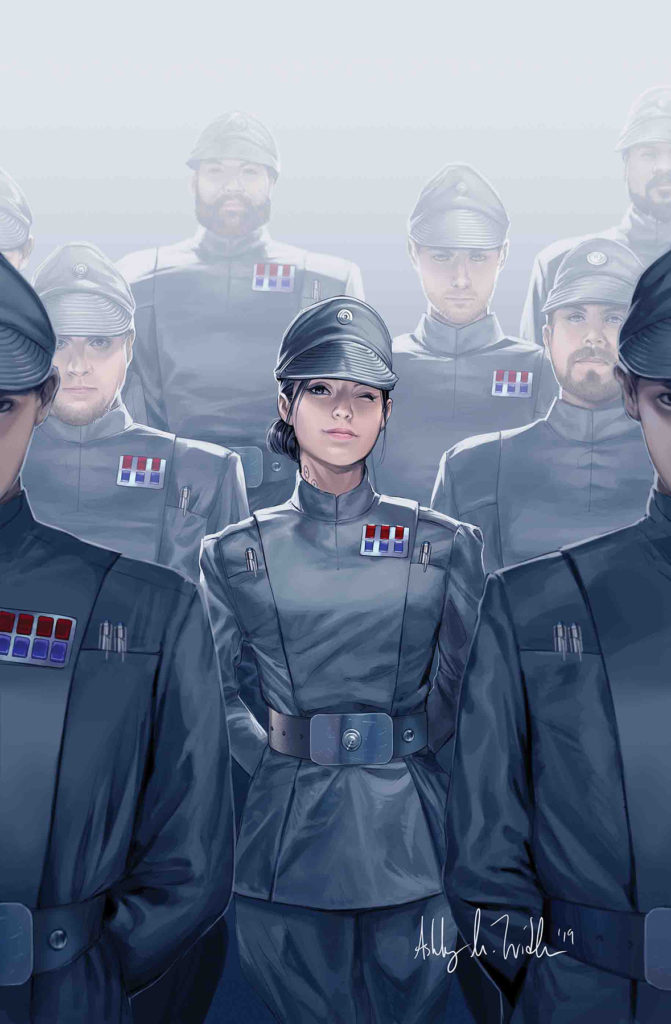 (W) Si Spurrier (A) Andrea Broccardo (CA) Ashley Witter
“UNSPEAKABLE REBEL SUPERWEAPON” PART IV
•  It’s time for DOCTOR APHRA to do what she does best: honor her commitments, help people in need, do the right thing.
•  Hahaha, nope, the people she’s swindling won’t buy that either. Unlucky for them, she’s always two steps ahead.
•  Unlucky for her, the steps lead directly to Coruscant, and into the arms of an old enemy…
Rated T
$3.99 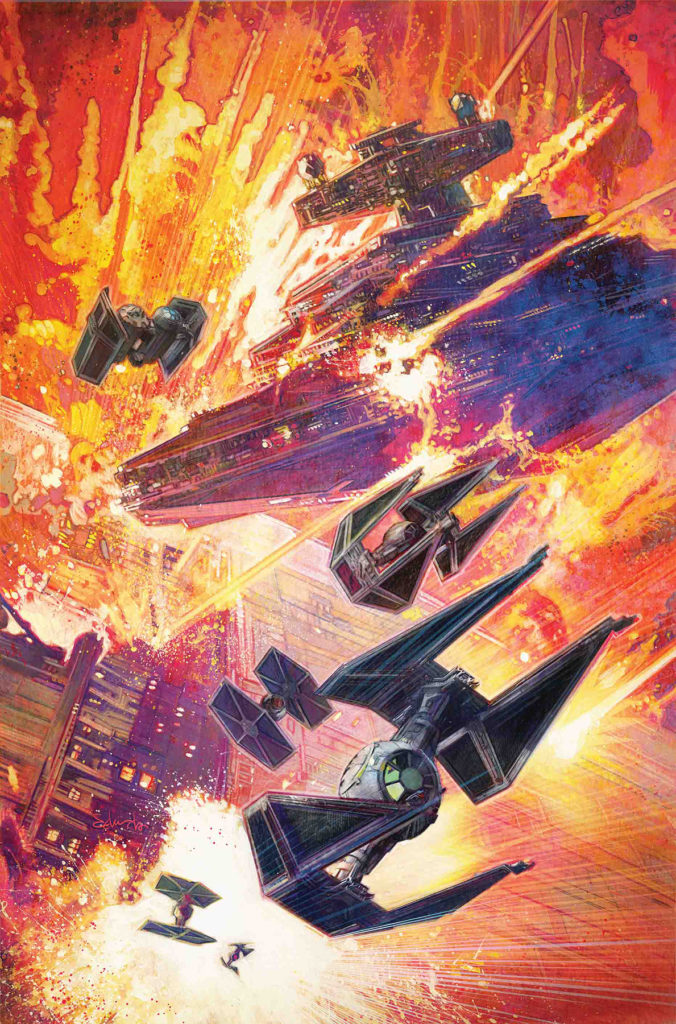 (W) Jody Houser (A) Roge Antonia, Juan Gedeon (CA) Tommy Lee Edwards
THE EMPIRE STRIKES!
•  The mission is to deal a devastating blow to THE REBELLION.
•  Can the squadron come together in time to complete the mission?
•  And will any survive the fight?
Rated T
$3.99 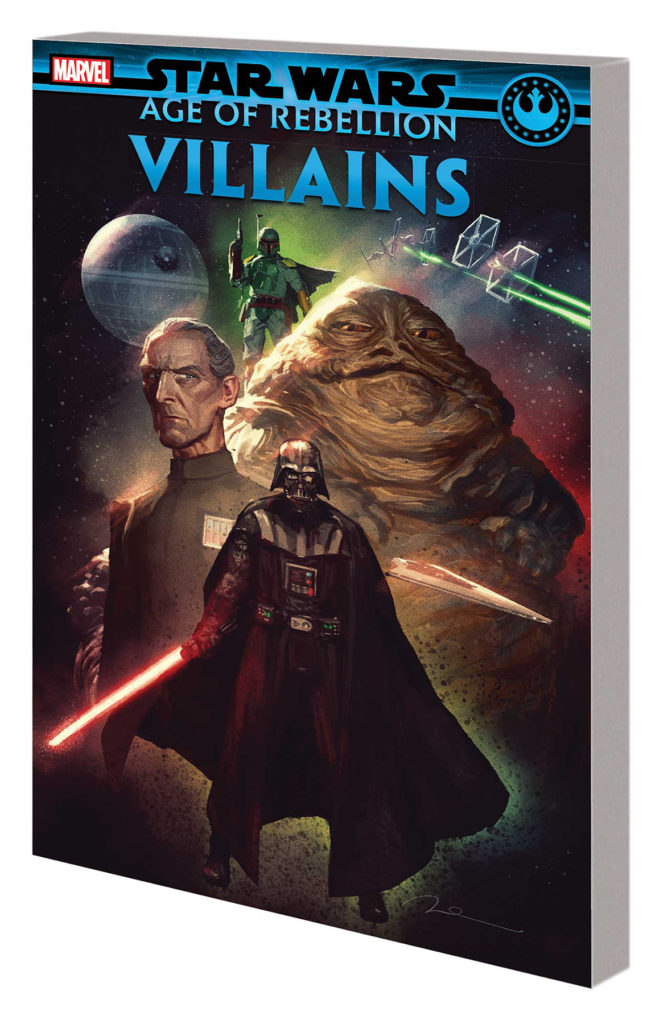 (W) Greg Pak, Si Spurrier (A) Marc Laming, Caspar Wijngaard (CA) Gerald Parel
The Age of Star Wars – an epic series of adventures uniting your favorite characters from all eras – reaches the iconic villains of the Original Trilogy! Boba Fett has earned his reputation as one of the galaxy’s greatest bounty hunters, but what heart – if any – beats under that Mandalorian armor? Fury burns deep inside Darth Vader when a mere moff dares command him – but at what point does Vader show his true mettle? Discover what makes the name of Jabba the Hutt so feared across the galaxy! Behold the secret story of Grand Moff Tarkin! And get to know the cold, calculating assassin droid known as IG-88! Collecting STAR WARS: AGE OF REBELLION – BOBA FETT, DARTH VADER, JABBA THE HUTT and GRAND MOFF TARKIN, and material from STAR WARS: AGE OF REBELLION SPECIAL.
Rated T
$17.99
If you are interested in this trade paperback and don’t wanna order it from your local comic shop then help out this site and order it here! 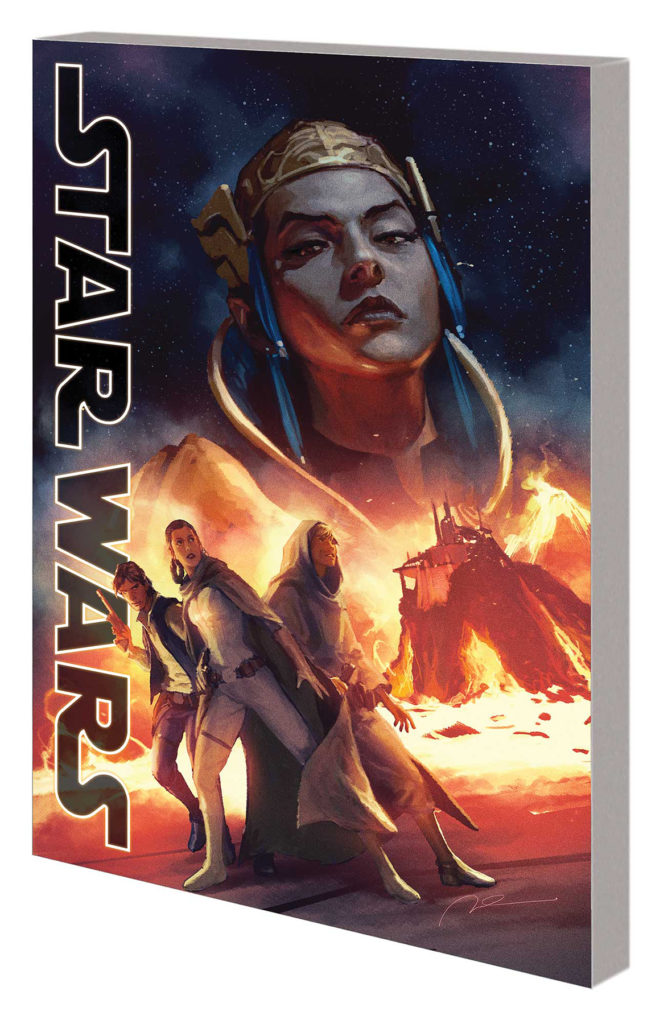 (W) Kieron Gillen (A) Andrea Broccardo, Angel Unzueta (CA) Gerald Parel
Kieron Gillen’s run reaches its cataclysmic end! With her planet under threat, a brave royal battles to save it! No, not Princess Leia – this time it’s Queen Trios of Shu-Torun, ally to Darth Vader and the Empire! And Leia is the one on the attack, with an all-star team and a plan her enemy won’t see coming! But some members of Leia’s squad have schemes of their own. Meanwhile, Kanchar returns with his amazing cybernetic arm. And Luke Skywalker must hold out against the overwhelming force of…his own allies?! Plus: Just when you think things couldn’t get worse for the rebels, they must find a way to survive an orbital bombardment! Will anyone escape Shu-Torun alive? Collecting STAR WARS (2015) #62-67.
Rated T
$17.99
If you are interested in this trade paperback and don’t wanna order it from your local comic shop then help out this site and order it here!
Links from this article:
STAR WARS AGE OF REBELLION TP VILLAINS
STAR WARS TP VOL 11 SCOURGING OF SHU-TORUN