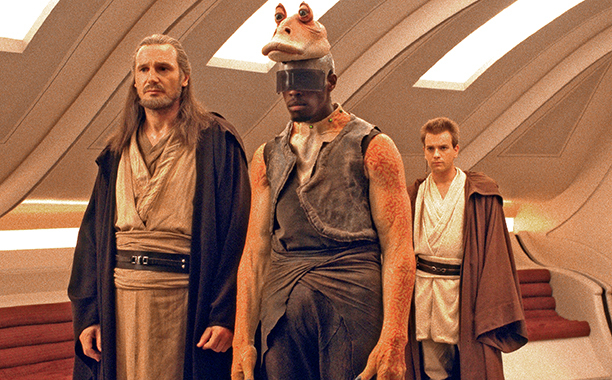 Not many people are familiar with the name Ahmed Best, but many are familiar with Jar Jar Binks, one of the most iconic faces of the Star Wars prequels. Making his first appearance in The Phantom Menace in 1999, Jar Jar was popular with children and mocked by adults everywhere. Regardless, George Lucas loved his character so much that he continued Jar Jar’s role in Attack of the Clones (2002) and Revenge of the Sith (2005).

Even so, Jar Jar’s popularity dipped even further, and he’s widely regarded as the worst Star Wars character of all time. He became a symbol that fans “love to hate” and a large reason to why the prequels were so heavily disliked by a majority of Star Wars fans.

But there was a face behind Jar Jar Binks, and his name is Ahmed Best. At only 25 years old, Jar Jar was his first major film role, and he was excited to see where his career would take him after landing a role in one of the most widely acclaimed franchises of all time.

But his enthusiasm was quickly diminished with the fans’ reception to Jar Jar Binks. Posting a picture with his young son on Instagram, he wrote, “20 years next year I faced a media backlash that still affects my career today. This was the place I almost ended my life. It’s still hard to talk about. I survived and now this little guy is my gift for survival.”

Although this is the first time Best is admitting thoughts of suicide after his role, this isn’t the only time that Best has addressed the media backlash against him. Last year, he told Wired, “I had death threats through the internet. I had people come to me and say, ‘You destroyed my childhood.’ That’s difficult for a 25-year-old to hear.”

But death threats and bullying in the Star Wars fandom are nothing new. Opposite of Ahmed Best’s Jar Jar Binks was the young Anakin Skywalker, played by child actor Jake Lloyd, who was only ten years old at the time of filming. Between the bullying at school and the overall audience reaction to his performance, Lloyd described his life as a “living hell” and vowed never to act again.

Recently, Mark Hamill told Vulture that he’s still upset about the way that Jake Lloyd’s performance was treated by fans: “I couldn’t believe some of the things they wrote about the prequels, you know. I mean really, beyond ‘I didn’t like it.’ I’m still angry about the way they treated Jake Lloyd. He was only ten years old, that boy, and he did exactly what George wanted him to do. Believe me, I understand clunky dialogue.”

It’s no secret that Star Wars fans are a passionate bunch. When Disney purchased Lucasfilm, they didn’t only buy the legal rights to use Darth Vader and lightsabers however they pleased. They inherited a forty year old fanbase that had very specific expectations for how they wanted their story to be treated, and it’s clear that they can be extremely vocal when they feel that those standards aren’t being met, whether by the actors or the producers themselves.

But it’s important to remember that as much as we may love or hate some characters, at the end of the day, they’re just people. It’s easy to sit behind a screen and tell an actor to get a thicker skin, but it’s much harder to be that actor and accept criticism for a performance you loved. Put yourself in Ahmed Best’s shoes. You get your first major role in a film – and not just any film – a continuation of the Star Wars saga so many people love and admire. You put yourself out there and give everything you have to the role. You follow all of the directions of the cast and crew and do everything the director asks of you.

And the audience hates you for it. They send you death threats, bully you, and vent their own frustrations of the prequels lackluster performance on your character. On things that you have absolutely no control over. How can you proceed with your acting career when most people only recognize your work as the one character that everyone despises?

Some say actors are “asking for it” with the kind of lifestyle they choose, but no one would choose that sort of life. Actors love the work that they do and hope that the audience can appreciate their craft and what they put into their performance. Criticisms are one thing. Not everyone is going to love the way an actor performs, or the things that a character does and says. But when the slights of the character start affecting the actor himself, when the audience fails to separate an actor from his or her character, that’s when the real trouble begins.

The bigger question now is, when will it end?