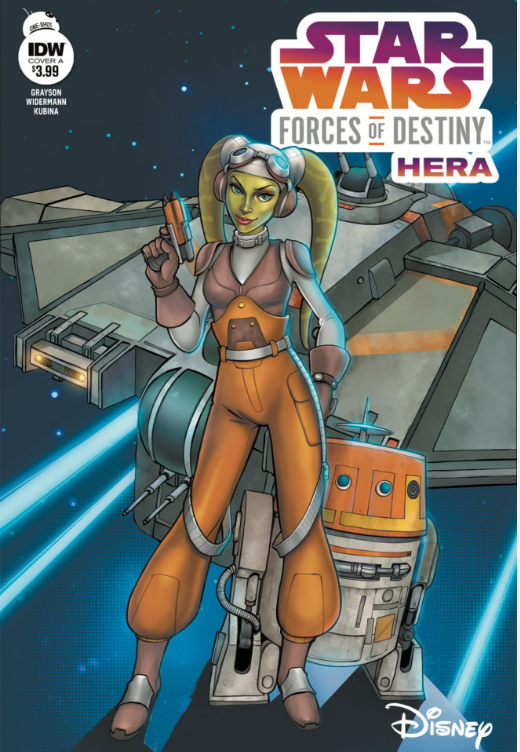 IDW has started publishing a series of one shot comics from The Forces of Destiny cartoon shorts thats Disney started releasing last year on YouTube.  This past week they released the 3rd comic in the line based off the Star Wars Rebel character Hera.

The Star Wars Forces of Destiny initiative celebrates the inspiring stories of iconic heroes from a galaxy far, far away….

Star Wars Adventures has joined the festivities with an exciting weekly series of comic books that explores all corners of the Star Wars universe, showing how choices both big and small ultimately shape the destinies of beloved characters, such as Princess Leia, Rey, Padme, Ahsoka, and Hera along with your soon-to-be favorites from The Last Jedi, Rose and Paige! 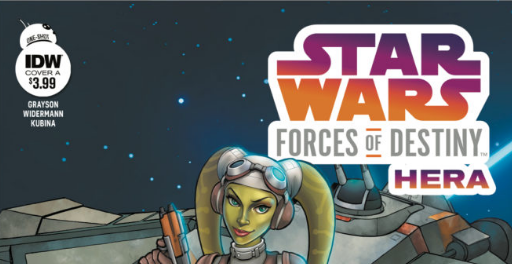 AVAILABLE: January 2018
DIAMOND CODE: NOV170413
CREATORS:
Devin Grayson (Author) • Eva Widermann (Artist, Cover Artist) • Elsa Charretier (Cover Artist) • Monica Kubina (Colorist)
IMPRINT: IDW
PAGE COUNT: 32
COLOR: FC
This comic follows a short story of Hera and Chopper on a mission to do some good in the galaxy. Its a fun little story of them going to the Fekunda Outpost to help free up the population from the grip of the Empire. While reading this comic I can

just hear Chopper’s beeps and boops in my head, just like you hear from the cartoon itself.  It’s a pretty amazing effect when you brain can do that for you.  Disney and IDW did a great job on this comic.
IDW has been knocking it’s comic series out of the park with their Star Wars comics.  In my opinion they are giving
Marvel a run for their money.  I get it the IDW comics tend to be more kid friendly and frankly are essentially aimed for the younger audiences.  This is Disney’s way of getting the younger generation that didn’t grow up on Star Wars into in fact STAR WARS.  GENIUS!!!  The stories with the IDW comics are really simple, easy to follow, and typically wrap up in one issue.  The artwork is amazing, simply amazing.  The colors hold true to being bright and wonderful.  It is really an easy pleasing view for the eye.
IDW is keeping it simple with just a couple variants on their releases which is nice to the wallet.

It looks like there might be a
couple more options out there for
covers after looking in the front cover.  So we will have to see what pops up out there in the comic shop world.

This is a quick read to be honest but well worth it.

You get a fun story and your kids get a cool life lesson to take home.

Go and pick this comic up today.