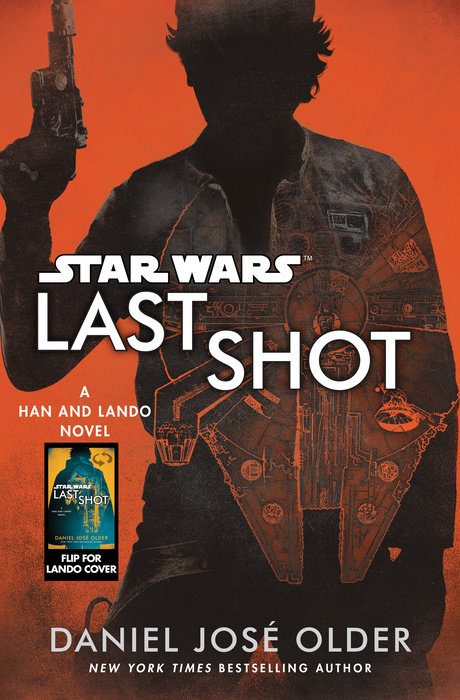 It’s not long until the Han Solo movie drops next month, and it looks like fans won’t have to wait long to get their Han and Lando fix. In a new book written by Daniel José Older, we get to explore more of the relationship between our favorite space scoundrels after the events of Return of the Jedi. It’s available today on Amazon, Barnes and Nobles, or your local book store so make sure to pick up your copy today!

Even the fastest ship in the galaxy can’t outrun the past. . . .

It’s one of the galaxy’s most dangerous secrets: a mysterious transmitter with unknown power and a reward for its discovery that most could only dream of claiming. But those who fly the Millennium Falcon throughout its infamous history aren’t your average scoundrels. Not once, but twice, the crew of the Falcontries to claim the elusive prize—first, Lando Calrissian and the droid L3-37 at the dawn of an ambitious career, and later, a young and hungry Han Solo with the help of his copilot, Chewbacca. But the device’s creator, the volatile criminal Fyzen Gor, isn’t interested in sharing. And Gor knows how to hold a grudge. . . .

It’s been ten years since the rebel hero Han Solo last encountered Fyzen Gor. After mounting a successful rebellion against the Empire and starting a family with an Alderaanian princess, Han hasn’t given much thought to the mad inventor. But when Lando turns up at Han’s doorstep in the middle of the night, it’s Fyzen’s assassins that he’s running from. And without Han’s help, Lando—and all life on Cloud City—will be annihilated.

With the assistance of a young hotshot pilot, an Ewok slicer prodigy, the woman who might be the love of Lando’s life, and Han’s best and furriest friend, the two most notorious scoundrels in the New Republic are working together once more. They’ll have to journey across the stars—and into the past—before Gor uses the device’s power to reshape the galaxy.