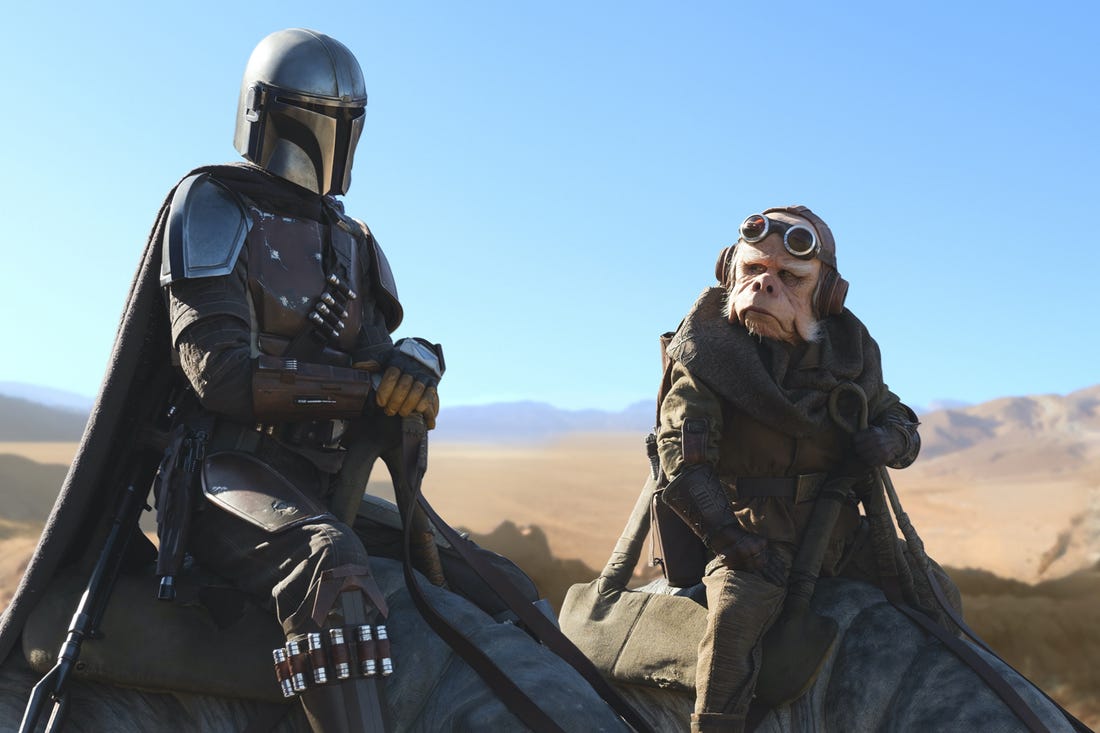 Lately, I’ve been trying to figure out why The Mandalorian, the latest Star Wars story, has got me so hooked and then I realized it’s the emotional heart of it all. And it’s not just Baby Yoda (though he is a factor.) That heart can be found in the titular Mandalorian himself. From his first scene, the show establishes him as your typical badass bounty hunter that we’ve come to expect from Star Wars. Yet as the story goes on, we see that, underneath all that armor, is a whole lot more compassion and gentleness than you think.

Usually, characters like Mando (that is how I shall refer to him until we know his real name, I have spoken) tend to be one of those cynical, hardened, don’t play well with others archetypes. And that is kinda true for Mando in the beginning (he does carbon freeze a dude in the first ten minutes) and understandable given his tragic past. Yet Mando is gentle enough to trust and rely on other beings and treat them with respect and dignity. One prominent example is in Chapter One, in his conversation with Kuiil after he tames the Blurrg.

“Since these ones arrived, this territory has been an
endless stream of mercenaries seeking reward and bribing destruction,” says Kuiil.
“Then why did you guide me?” asks the Mandalorian.
“They do not belong here. Those that live here come to seek peace. There will be no peace until they’re gone.”

I think that this conversation is symbolic of what sets Mando apart from other bounty hunters and other character archetypes that he would normally fall into. He tames the Blurrg, not without annoyance, but he’s quick to understand that being gentle is key to understanding and taming it. And this willingness to learn and cooperate with others shows up again when he offers to split the reward with IG-11 (RIP). He’s not immediately prideful when he is easily overpowered by the other bounty hunters and instead openly asks for help and works together with IG-11 to complete the mission…. until they meet Baby Yoda (The Child).

Mando’s relationship with Baby Yoda has drawn in many fans, and it’s not hard to see why. Witnessing Mando act as a father figure, from saving him from the Imperials and Bounty Hunter’s Guild while making sure he’s sleeping safe and sound to letting him play with the control board ball, makes the heart of the show all the more clear.

Mando also shows a lot of respect for a bounty hunter from refusing the Mudhorn sigil due it not being a “noble kill” from his assigned mission to deliver Baby Yoda and honoring Kuiil’s wishes of not wanting to work for him due to his newfound freedom. He knows the value of a life and even if his occupation and situation requires him to use violence, he is not heartless.

Many are invested in The Mandalorian because its main character is truly compelling in a way that fits 2019. In this dark world we live in, we are no longer entertained by the same grim, dark and gritty heroes who constantly snark with each other and show no sincerity. And while Mando does have a cynical surface, it’s that kind and honest center that makes us all go soft. It’s the type of character that shows that even in the darkest environments such as the galactic criminal underworld, there can still be simple goodness and compassion, fitting of Star Wars. He especially works as a character that breaks trends of toxic masculinity in fiction, not unlike Finn and Poe Dameron in The Force Awakens.

Honestly, the main reason The Mandalorian works so well is because of well…the Mandalorian himself! (Although, as we said, Baby Yoda definitely helps.)

So what do you like best about The Mandalorian? Do you watch for the title character or are you more invested in finding out Baby Yoda’s fate? Sound off in the comments below and May the Force be with You!

One thought on “Heart of the Mandalorian”