So earlier this year Disney & Funko, found here, informed us that they were going to release a new line of Dorbz at the request of Star Wars fans.  Funko CEO, Brian Mariotti, informed us 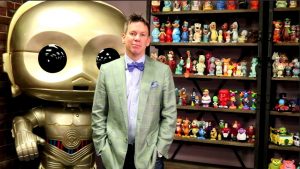 that within the year we would see this new line of figures from Funko.  The original release for this line was a D23 Exclusive Han Solo. 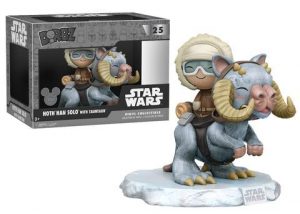 Now just looking at the box number alone tells you that they have a larger plan for these figures.  The D23 Exclusive is labeled #25 and we have not seen any of the other figures that will be released in this line.   Already the Han Solo D23 Exclusive is already selling for about one hundred on the secondary markets.  Which makes it hard if your a “completionist” and want to start collecting this new line of figures.  The second “wave”, if you want to call it that to gain the attention and traction of fans was the Cantina 3-pack which features Greedo, Walrus Man, and Snaggletooth.

Well it appears right before the end of the year, at the start of the 2017 Holiday Season, Funko has decided to release the first official wave of nine figures, including a “flocked” Chewbacca.  The nine figures include the above mentioned “flocked” or “chase” Chewbacca along with Darth Vader, Princess Leia, Luke Skywalker, Han Solo, Jawa, C-3P0, and a Storm Trooper.

Right now the official and only retail store to pick up these Dorbz at is the Disney Store.  Not sure if they are online only but I know you can pick them up at the Disney Parks, and we are currently unsure about Disney retail stores around the country.  They are retailing for $11.95 for the single figures and $39.95 for the Cantina 3-Pack.  Good luck getting the Han Solo unless your gonna drop in the market of $100.00 on the secondary markets.  Question is will they become cheaper when they are released to other stores?

Brian Mariotti does tell us to expect more in the future along with “ships and beast” along with other individual figures.  Mariotti also mentions that they will become available for purchase through other outlets.

What are your thoughts on these new figures?  Are you going to try and collect them?  Thoughts on them being more expensive than the larger Funko PoP! figures?