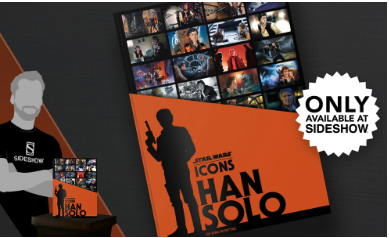 New from SideShow, and an exclusive only available at SideShow, the new Star Wars Icons: Han Solo.  This is a hardcover book by Insight Editions and can be found here, where you can pre-order your copy today.  Per the SideShow website, it should ship anytime from November to December of this year.  Perfect holiday gift for your most loved Star Wars fan.

Smuggler. Rogue. Hero of the Rebellion. Scruffy-looking nerf herder. Han Solo has been called all these things and more since making his debut in the original Star Wars film back in 1977. Four decades later, the irrepressible Solo continues to be one of the most iconic and enduring elements of the saga.

Star Wars Icons: Han Solo covers the character’s entire journey, from his genesis in George Lucas’s first drafts of Star Wars to Harrison Ford’s iconic performances in the original three films and The Force Awakens, and the character’s rebirth in Solo: A Star Wars Story. The book also takes an in-depth look at Solo’s role in the Star Wars expanded universe, through novels, comics, video games, and more, and the indelible impression the character has made on pop culture.

Comprehensive and revelatory, this is the definitive book for Han Solo fans across the galaxy.

Gina McIntyre is a veteran entertainment journalist who has covered movies, TV, and
music for the Los Angeles Times, the Hollywood Reporter, and Entertainment Weekly.
She is the author of Guillermo del Toro’s The Shape of Water: Creating a Fairy Tale for
Troubled Times and The Art of Ready Player One. Her writing has also appeared on
RollingStone.com. She lives with her husband and daughter in Riverside, Illinois

Item shown is a prototype. When shipped, the final production piece may differ in appearance.