The biggest new character from The Last Jedi, Rose Tico, makes her Star Wars Adventures debut in this special one-shot story! Rose prefers to solve problems from behind the scenes, but the threat of the First Order has put her front and center… 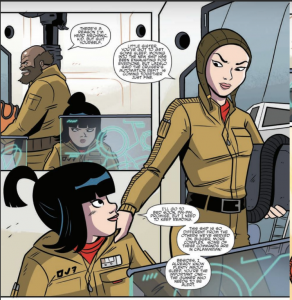 The first story being a pre The Last Jedi story featuring Rose & Poe.  We even get to see a peak at the sister duo of Paige and Rose together for a few panels in this comic.  We get to see Rose do what Rose does best and it’s actually a better showing of her character capabilities then what we get to see in the new movie.

Overall it’s a fun little story that should have made the relationship between Rose and Poe a little more important in the The Last Jedi, but I feel like their meeting in the movie was shown as their first meeting and that Rose hadn’t essentially saved Poe’s life in this comic.  I get it this came out post movie and was probably written post movie script and there is probably a large portion of the Star Wars fan base that will not pick this comic up, so in reality it won’t really effect much.  However it is considered canon so to someone like me that likes to cover all portions of the Star Wars universe, I think it should have been caught by someone. 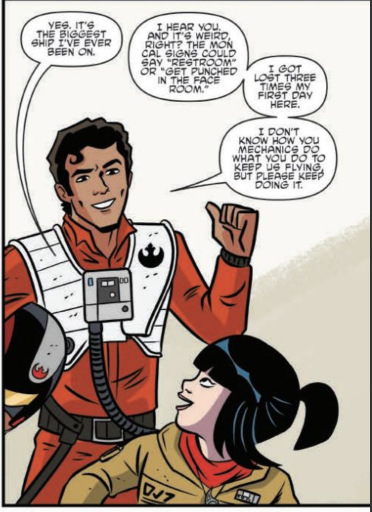 The second story is just as fun.  We get to see young Anakin Skywalker doing what he does best as a kid.  He is working for Watto in the junk shop, playing with junk and then racing Pod racers on the side.  We see the awesome little kid that has a kind heart and does for others like we see in Episode I.  We also get to see how and why Anakin has the reputation that he does when it comes to Pod Racing and further understand the joke from Episode I of Anakin never finishing a Pod Race.
For more info check out IDW Publishing website or check out your local comic shop to grab a copy today.
Overall I give this issue a 8/10.
I know this rating is lower than previous ratings but I still enjoy the artwork and the stories it just doesn’t have anything “new” per-say.