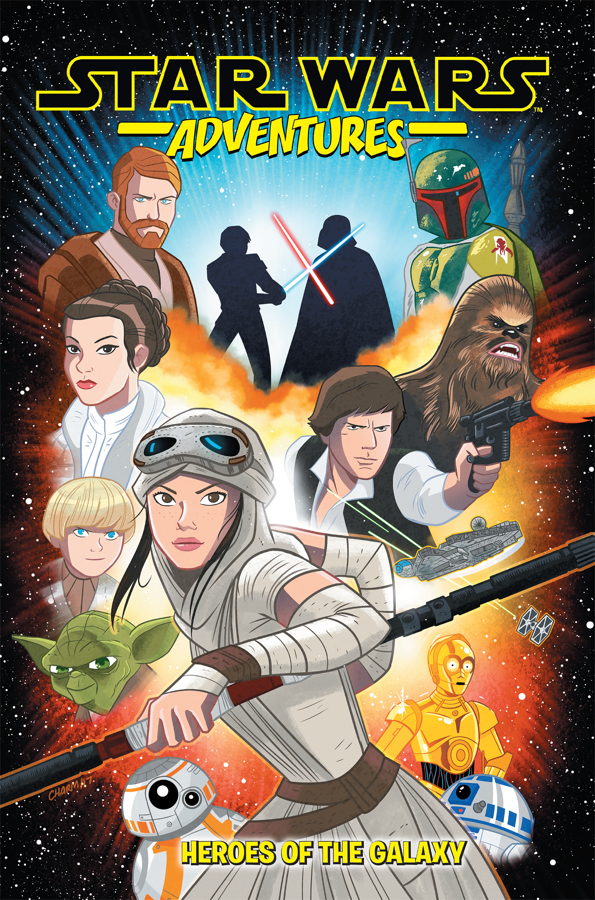 Travel to a galaxy far, far away in the first volume of an all-new series as a rotating cast of characters (and creators!) journey through Star Wars history! Stories range from before the events of the first film all the way up to Episode VIII: The Last Jedi, in theaters December 2017. Characters major and minor, classic and new, expand the world of Star Wars into new territory, telling larger-than-life stories that encapsulate the breadth of the galactic struggle between good and evil for a new generation of fans.

For fans of all ages and with a mix of old and new characters, Star Wars Adventures will appeal to Jedi everywhere, Master and Padawan alike!

AVAILABLE: November 2017
DIAMOND CODE: AUG170383
ISBN: 9781684052059
CREATORS:
Derek Charm (Cover Artist)
IMPRINT: IDW
PAGE COUNT: 80
COLOR: FC
CATEGORIES:Star Wars Adventures
Now I personally haven’t been able to pick this up and I’m not sure if its even out yet as it is scheduled for a December 2017 release.  At first I was thinking that this might be a collection of previously released comics but from looking at the previews over on IDW Publishing website it appears these might be original stories not released in the shorter 32 page comics released monthly.
I’ll try to grab a copy in the next few weeks and will you guys in on this!
UPDATE
Well guys and gals I was completely wrong on my previous thinking.  This is out already at your local comic shop and it is a collection of previous released comics.  It appears to be the first 3 or 4 comics all in one TPB and not original stories as I mentioned before.
Silly Me!