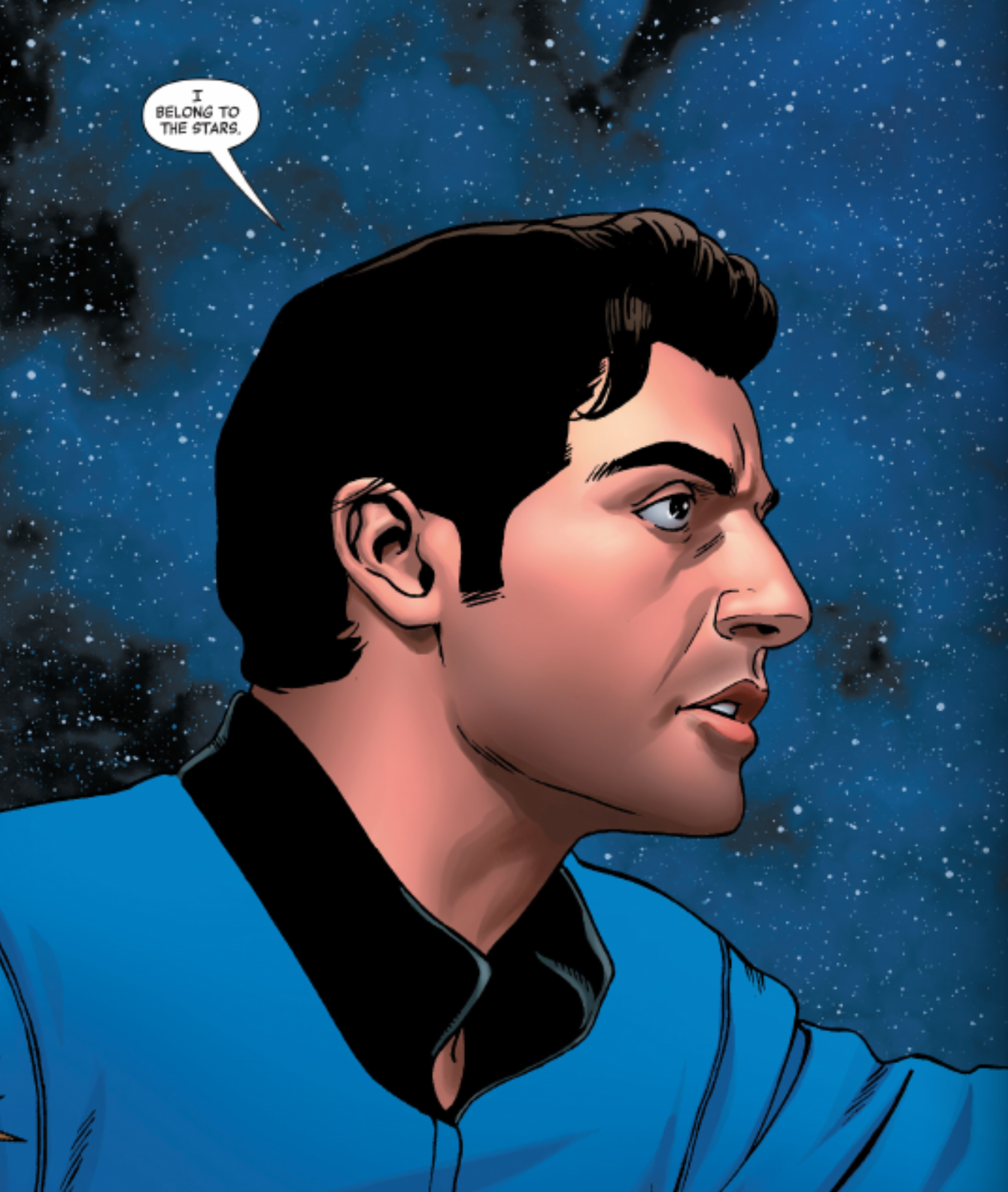 This issue of Star Wars: Age of Resistance focuses on flyboy Poe Dameron, back when he was commander of the New Republic Defense Force. When a protocol droid on his station is captured, he and Rapier squadron go to retrieve it. Unfortunately things go awry as Poe gets separated from his group, but he gets saved by an unlikely ally: the thief, and the ship he was just told to destroy. 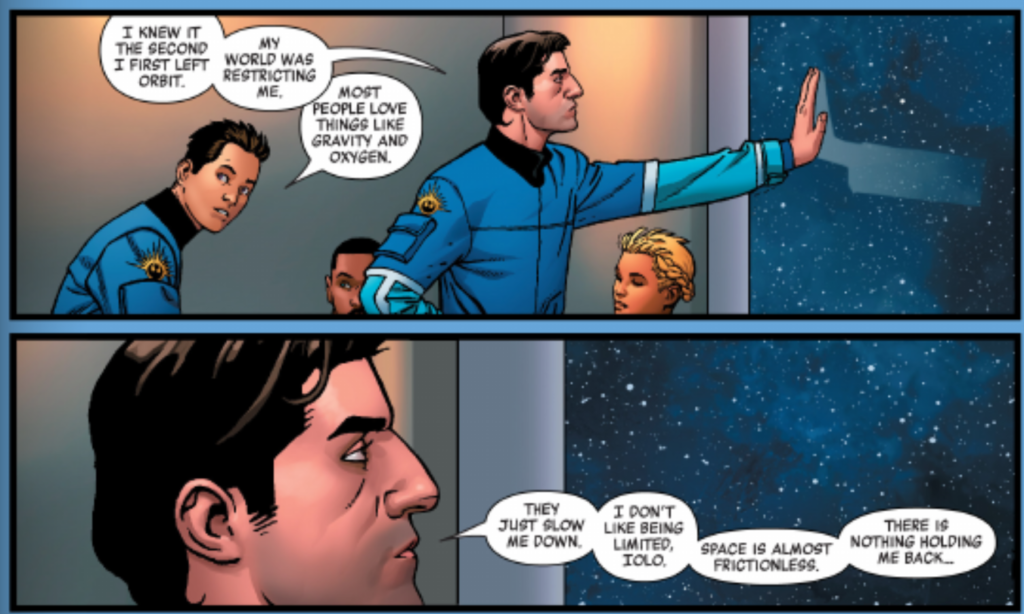 The story begins with Poe Dameron staring out into the night sky. He looks a bit younger, but definitely a bit more angsty. He’s relaxing with the rest of Rapier Squadron when a siren goes off, alerting them that someone has stolen the head of a protocol droid that contains sensitive information.

Rapier Squadron find the thief lurking beneath their ship, waiting for the right time to jump to hyperspace. Fortunately, Poe saw this move coming, and is able to temporarily knock out their hyperdrive, forcing them to dash away with Rapier Squadron in hot pursuit. The thief flies into the Lost Souls asteroid field, and Poe elects to chase after the thief solo in order to protect his squadron.

The thief is impressed with Poe’s leadership and decides to save him from an alien slug and give him a quick crash course in flight mechanics. They just manage to escape when the thief incapacitates Poe’s ship, but leaves his communication systems intact so that he can still call his squadron for aid. 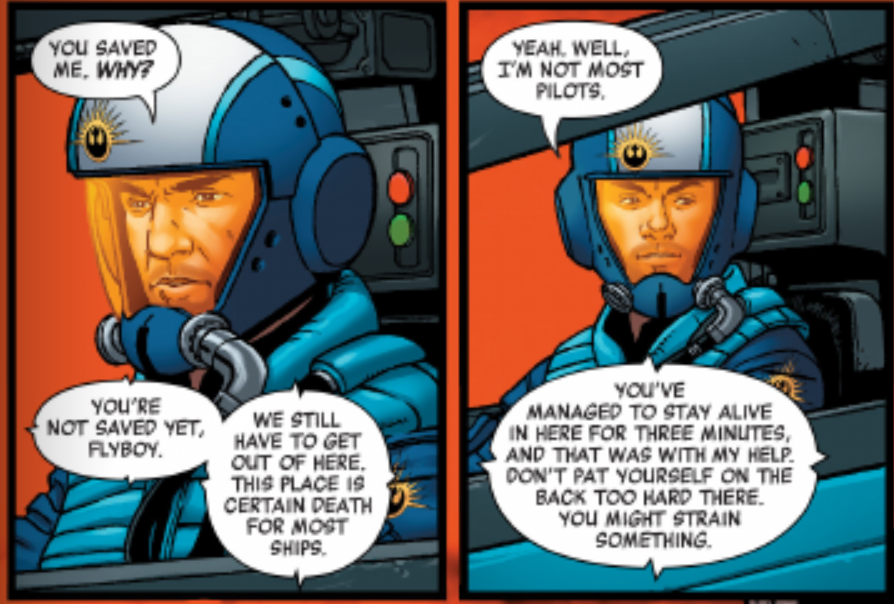 The final panel shows Nien Nunb piloting the craft, but it looks like the thief that Poe was conversing with was none other than Vice Admiral Holdo.

Overall, the story did have a similar feeling to the Poe Dameron comics, although the arc is a lot shorter and the art style is clearly different. I’m not so much a fan of this younger looking Poe, and the Poe in the last frame above simply doesn’t look like him at all. If anything, the uniform in the first panel almost makes him look like he’s fresh out of Star Trek instead of Star Wars.

Regardless, the dialogue was the strongest part of this comic. The witty banter between Poe and Holdo was fun, but the connection to Holdo felt forced. Considering their friction in The Last Jedi, it seems unlikely that the two have crossed paths before. Granted Poe didn’t know he was talking to Holdo, but Holdo had some idea that she was talking to Poe. And considering all the controversy between their interactions in The Last Jedi, it almost seems inappropriate for her to be the one “teaching Poe a lesson” here.

The comic ends with a brief overview of Poe’s character, and why JJ felt like Oscar Isaac was the best fit for the role. It’s a good summary, and helps highlight why Poe is such a fan favorite to so many. Despite his cocky demeanor, Poe does genuinely have his heart in the right place, and his humanity and humor is something that many aspire to have, especially in these dark times. 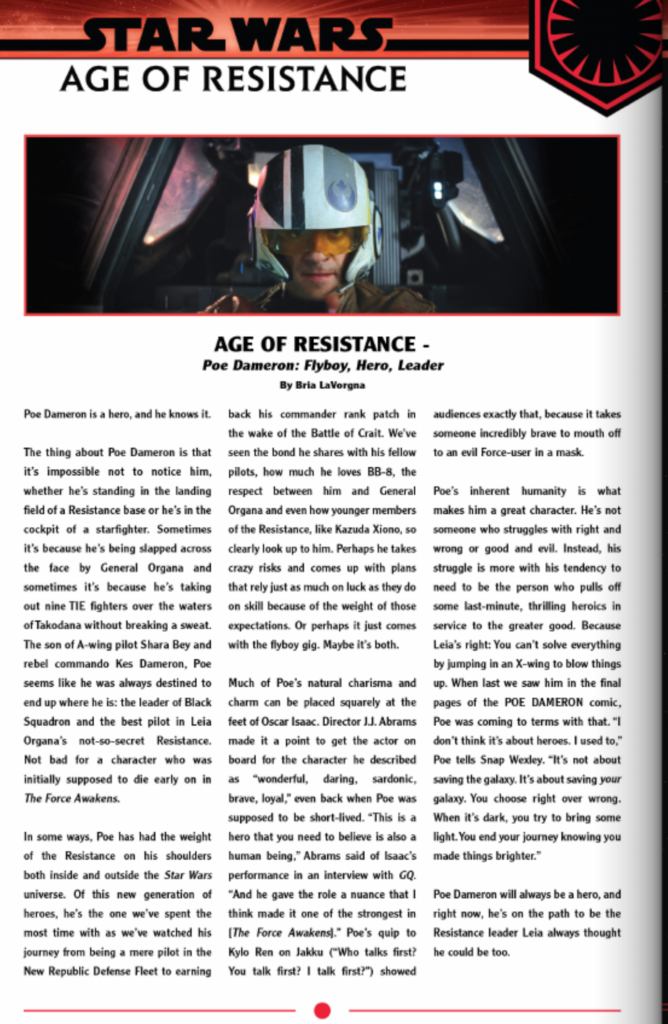