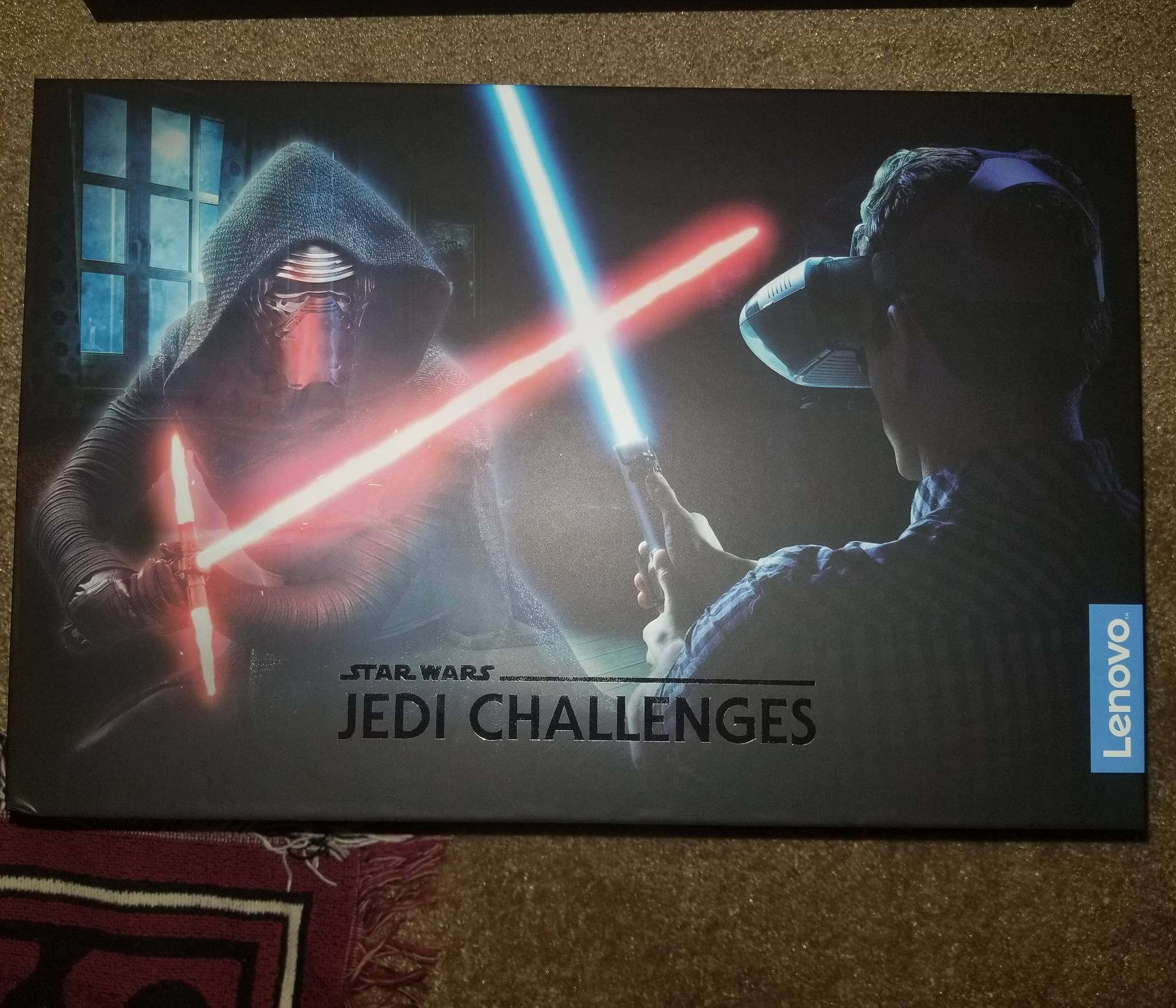 When I first heard that Lenovo was building its own VR experience for the optimistic Jedi-to-be, I preordered it without hesitation. I was actually so eager to preorder that I overlooked the obvious:

It wouldn’t ship until November 1st.

It’s been a painful wait, eased slightly by the ticket presales and recent influx of trailers and news, but at least the wait is over.

I’ll start off by saying that I’m no stranger to VR. I have the Samsung Gear VR that I use at least weekly, and while my two favorite games include fishing and chasing butterflies with a giant origami T-Rex I named Charlie, I was excited to see a game that would actually get me on my feet.

But before you get to the gameplay, you have to open the box. Set-up is my least favorite part of the process, and I think Lenovo made the process a little bit more complicated than it needs to be.

But I’m getting ahead of myself. 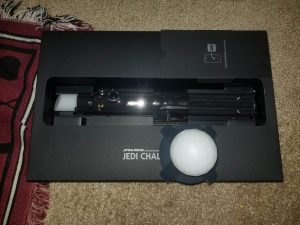 Inside the box, the contents are packaged neatly. On top is a tray containing the lightsaber wand, modeled in the style of Luke/Anakin’s original Graflex lightsaber. Underneath are the headset and reference beacon, as well as a box with all of the adapter cables and the technical instruction book. It’s apparent right away that while both the headset and the wand require charging, only one charging cable is provided. Luckily for those who want to pick it up and play right away (and by a show of hands, that looks like just about everyone) both are supposed to come halfway charged, and 2 AA batteries come included for the beacon.

Whether or not your phone is charged is entirely on you.

The setup is not readily intuitive, but it is workable. As I said before, it is more complicated than the Samsung Gear VR, but simpler than my friend’s explanation of setting up the HTC Vive, and the entire process is directed by the app (635MB on Android, so I hope you have an SD card handy). 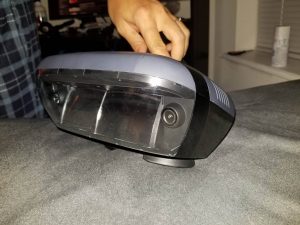 – App is free (better be, after the $200 entry fee)
– Apple: Requires iPhone 6 or better
– Android: Marshmallow or later (Samsung Galaxy S7 equivalent or better.)
I played on Samsung Galaxy S8 with Android Nougat

Honestly, I think that hands down the hardest part of the whole process is pulling out and reinserting the phone tray. It’s really snug, and the entire time I wondered if there was a latch that I missed or if I was going to break something. I’m not one that likes to be “forceful” especially with brand new expensive electronics, and so I think that the design could have been improved significantly, like the Gear VR’s simple plug and play. Here, not only do you have to place it in a phone tray, make sure it’s secure, push that into the headset slot, but there is also an additional cable that runs from your phone to the headset to ensure it’s working properly.

In short, it’s a lot of work. At least, it feels like a lot of work, although I think the whole process took about ten minutes to complete. At least the lightsaber calibration was an effortless process, press a button, move it a little: under thirty seconds to complete.

Another thing that I think could be significantly improved is the headset. The velcro straps are not as sturdy as they could be, and the back harness is pretty narrow. That being said, it would barely stay on my head, and kept slipping down my nose, even at the tightest setting. My husband claimed my “silky smooth hair” was too slippery, but I feel like Lenovo should have considered that all Jedi, especially the Skywalkers, have luxurious hair, and should have taken this into account.

I ended up pulling on a beanie which helped resolve the problem somewhat, but after about twenty minutes of gameplay I could feel the straps loosening and I was right back to square one, holding it up in one hand while battling stormtroopers with the other. It’s passable, but annoying, and I think part of the problem is that it’s just too heavy on the front end and the straps don’t provide nearly as much support as they should. I may have to do some DIY support on it myself, but I feel like this is something that Lenovo should have addressed back in square one.

Note: Maybe I’m biased, but I don’t think that I have a tiny head. I’m a full sized adult, and if I’m having trouble, I can’t imagine kids would be able to wear it, so this might be something to scratch off their Christmas list early if they were asking for it.

I think that one of the strengths so far comes in terms of the tracking. Despite early technology expo reviews, the tracking works rather well, at least in my opinion. The one caveat is that you really do need room to move. At times,  the battle droids and stormtroopers seemed to hang out on the edge of the “training circle,” requiring me to move closer and closer until I realized I was face to face with the wall.

One thing I am a teeny bit disappointed in: the fact that Force abilities, like the aforementioned Force push, are controlled with a press of a button. I wish there was a special glove or device or something that would allow you to wield the lightsaber in one hand and use your Force abilities with the other.

Maybe this will be something they’ll add in the future, but as they say, the future is now, and it’s something I was really hoping to see. Alas.

Each new world introduces new game mechanics, such as blocking, Force powers, dodges, and escaping Lord Vader’s infamous choke. To get to the boss on each world, it plays in a style that 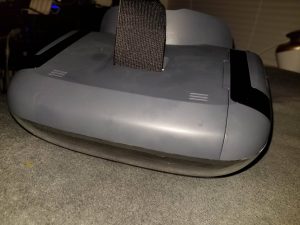 will feel familiar to those who play Galaxy of Heroes: two rounds of lower-class enemies, followed by a boss round. So far I’ve only played the lightsaber battles at time of writing, but there are two other games loaded into the app, like Holochess, and Strategic Battles.

So that’s the set-up and the general game mechanics. I’ll be writing about my experience with the game in a second review that will be up tomorrow. As of right now, it’s a fun game with significant room for improvement. The amount of switches and latches that go into just setting up the game make it a little hard to just pick up and play, especially compared to the Gear VR, but it’s something that I’m hoping will get easier with time. I’m still trying to think of ways to reinforce the straps on the headpiece to keep it from slipping down, but as of right now the beanie solution is workable for short bursts.

If you have any questions about the headpiece, set up, tech specs, or anything else, feel free to sound off below!