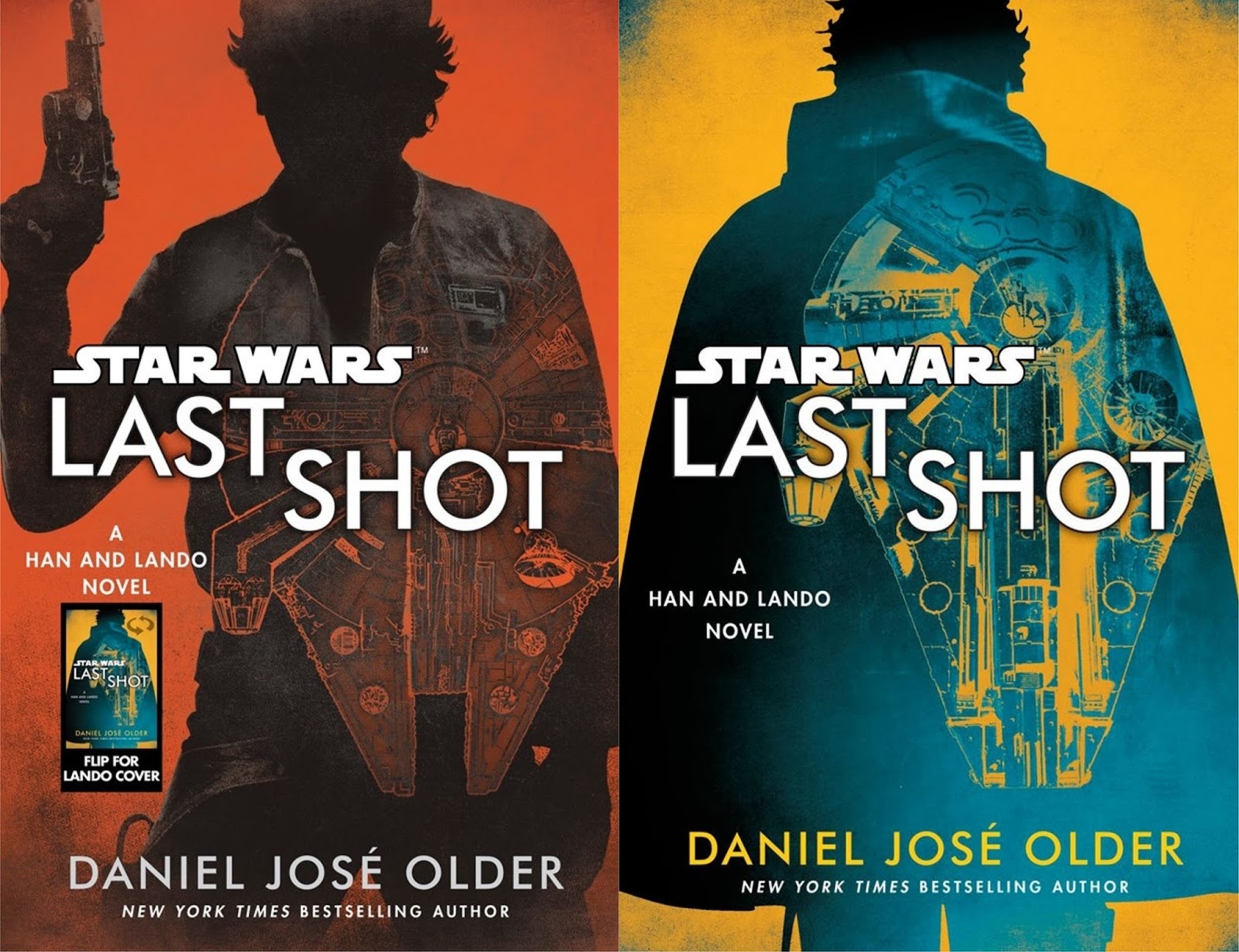 Fresh off the StarWars.com website, comes an exclusive excerpt from the upcoming Star Wars book Last Shot.  This book is available for pre-order from numerous sites,(We don’t favor one so choose whomever you like.) and will be released on April 17, 2018.    Last Shot is written by Daniel José Older and it appears we are in for an intense read.

From the information provided by StarWars.com, this book will take place over three different time periods.

when Lando owned the Falcon; shortly after Han takes ownership of the hunk of junk; and not long after the Battle of Endor. It also shows us Han Solo as a new father

The excerpt we see appears to be during the last of these periods of when Han Solo is a father and from the little they give us it appears this is going to be the same old Han that we fell in love with.

(Excerpts from Last Shot by Daniel José Older from the StarWars.com site)

“I’m not a general anymore,” Han growled, still trying to keep his voice down.

Mon Mothma nodded. “I am aware.” She already struck Han as a sort of spectral presence, all those flowy robes and that faraway look of hers. Being a see-through blue holoform only enhanced that. “It is my habit to refer to our veterans by their rank regardless of their sta­tus.”

“The nerve,” Han grumbled, holding Ben against his chest as he hoisted himself off the couch. “Ooh.” A flash of pain simmered along his lower back. Old battle wounds. Or just oldness. Or both. Fantastic. The holoscreen across the room said it was 0430. He had a pile of boring meetings today, kicking off a week of planning and preparing for the inaugural meeting of the New Republic Pilots Commission, which Han had grudgingly accepted the leadership of—a mistake he was still trying to figure out how he’d been suckered into. Han hated planning. He also hated preparing. But what he really hated above everything else, besides maybe the Empire itself, was meetings. And now the Empire had been gone for more than two years, the remnants of their fleet blasted out of the sky over Jakku just as Ben was being born, in fact, and that cleared the way for meetings to take the number one slot on the Things Han Hates list.

And if there was one thing this fledgling republic loved, it was meetings.

He could probably catch a tiny snooze before he had to get ready, Han thought, lying back. Little Ben looked up groggily, those dark eyes settling on Han, studying him. Han had no idea how a two-year-old could have such ancient eyes. It was as if Ben had been waiting around for a millennium to show up at just this moment in history.

In the corner now, one hand on the doorknob, the other on the trigger, he glanced at Ben. Still asleep. Everything in Han wanted to just kick through the nearest window and let loose a barrage of blast­erfire. But that wasn’t the way, and if this was any threat at all, such recklessness would probably get himself and Ben killed.

Slowly, smoothly, he craned his neck to look at the small datascreen showing the balcony security feed.

All the tightened muscles in his body eased at the same time as he threw open the door, a huge smile breaking out across his face. There, in the purple haze of morning, stood Lando Calrissian, decked out as always in an impeccable dress shirt, half cape, shined boots, and a perfectly trimmed goatee.

One thing that was different about Lando: that wide scoundrel grin was not stretching across his face. In fact, he looked downright pissed.

Han didn’t finish because now Lando was reaching back, winding up, fist tight, and then swinging forward with what looked like all his strength. And then, sure enough, fist met face and Han flew back­ward with a shocked grunt, thinking, as the world flushed to dark­ness: I should’ve probably seen that coming.

For the full read head on over to StarWars.com.

Also for more information on the Last Shot, check out the interview with the author at StarWars.com.