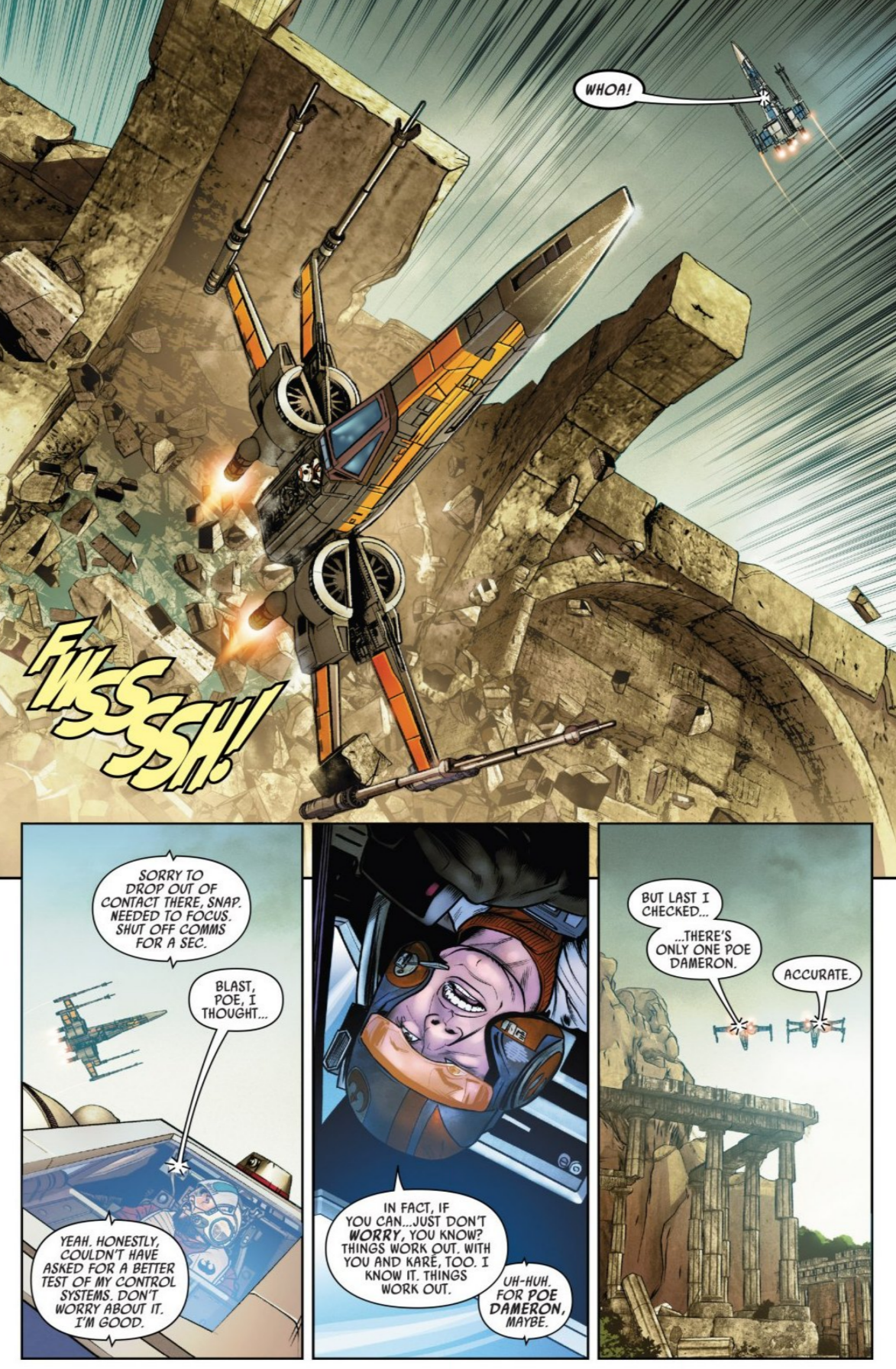 I love the Poe Dameron comic, and this week’s plot does more to tease the eventual release of Lor San Tekka, headed by none other but Leia Organa herself. There’s some light spoilers ahead, so you may want to head over to Comixology or your local comic shop to grab your copy before you read on.

We first start off with Poe and Snap running drills. Poe gets Snap to talk about his breakup with Kare and how they all can use a little bit of silence to focus. Will this come into play later on? Even though Snap accidentally collapses a tunnel with Poe still inside, Poe easily escapes with his unabridged optimism, reminding us that maybe things will work out in the end if we hope they do. Meanwhile, back in the hangar, Jess works on trying to pilot her X-Wing without an astromech until a familiar friend comes to her aid…

Meanwhile, Leia Organa is finally getting involved in the action. It looks like she did some digging into her family history once she finally realized who she was, and has obtained some of Padme’s old dresses…for those of you who were wondering what happened to those things, apparently they weren’t destroyed after all! It’s a bit of a touching scene when Leia wonders out loud if she’ll ever have a granddaughter to wear one. Of course, she’s simply playing a role here, but one can’t help but wonder if she actually means what she’s thinking. Of course, with Ben Solo gone and Kylo Ren now in his place, that looks extremely unlikely to ever happen in the future.

Continuing onward, we also get to see a bit more of Lor San Tekka and his beliefs about the Force. It’s interesting because, as I mentioned in another article, Luke trusted Lor San Tekka enough to leave him the only piece to his whereabouts after he disappeared, and Lor San Tekka still believed that “Only the Jedi can bring balance to the Force,” as he told Poe Dameron on Jakku. That’s why it’s so interesting to hear Luke say, “It’s time for the Jedi to end” in The Last Jedi trailer…what could have happened to change his thinking so drastically?

Hopefully we’ll get some answers in two weeks, but for right now, it looks like the writers are trying to help bridge the gap by teasing something else. An EW article released earlier this week teases that Kylo Ren and Rey might become allies instead of enemies, and this article seems to push forward with this idea by hinting that the light side and the dark side were not only once in balance, but seemed to work together at one point, that one could potentially harness and utilize both sides of the Force. It’s an interesting idea, and we’ll have to see if these beliefs are further explored in The Last Jedi.

And last but not least, we finally get to see General Organa out in the field again, right in the thick of the action. I won’t spoil it for you how this plays out, but I think you already know that no matter what happens, our Princess Leia is always two steps ahead.

So that about does it for this issue. I thought it was a well-written issue, and the artwork was the familiar style that we’ve been gotten used to. Poe had at least one snappy one liner this issue, which is always a plus, and I like that this issue focused more on the whole team, and is definitely preparing to move things forward with the find Lor San Tekka plotline that we started 20 issues ago before other distractions came up.

And speaking of distractions, you can see Agent Terex looming behind Poe on the cover of the next issue. Is he going to somehow be the key to finding and releasing Lor San Tekka from imprisonment? I can’t wait to find out!