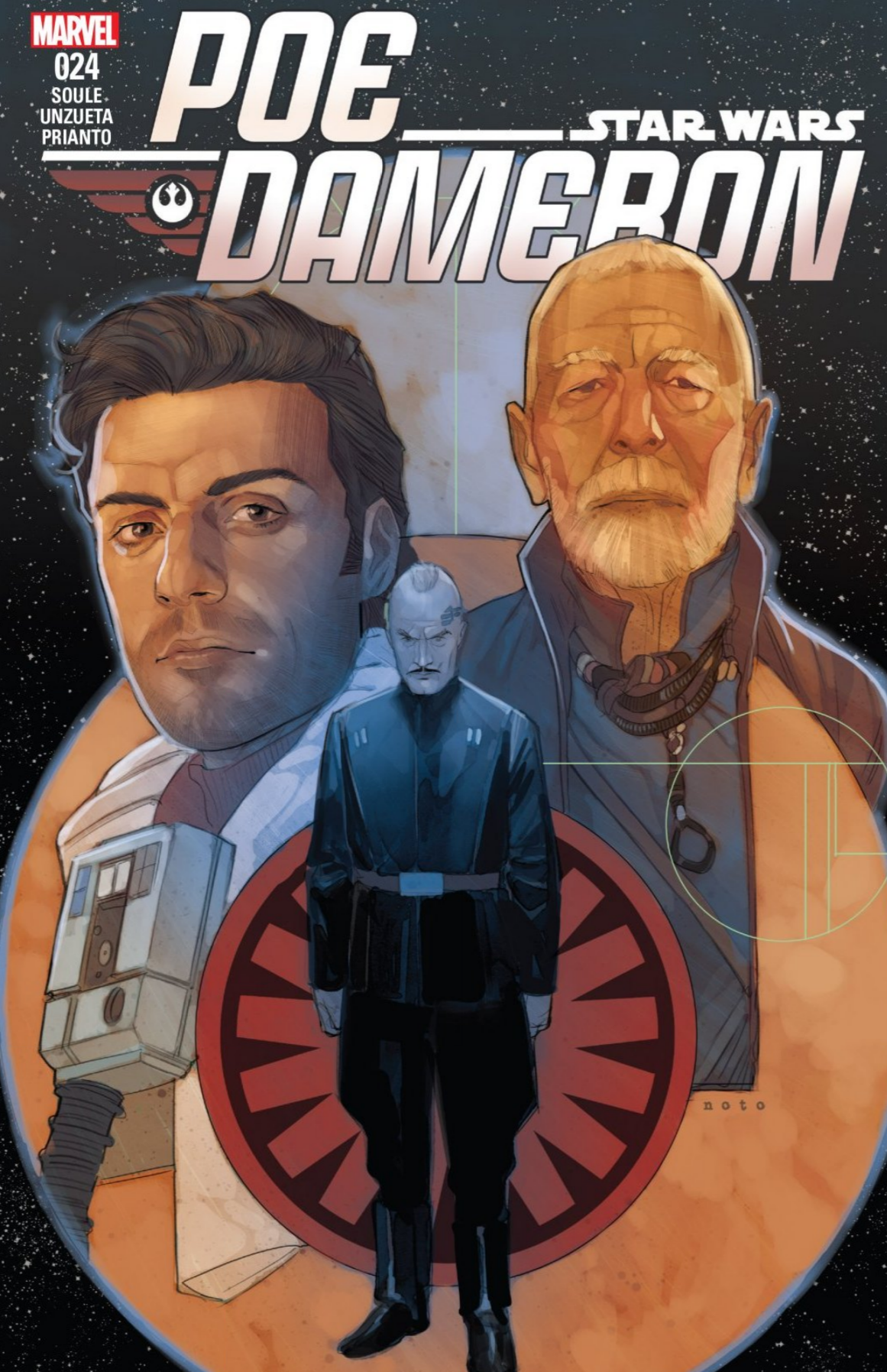 The Poe Dameron comic series is slowly drawing to a close. With only one more issue awaiting us next month, it’s clear that the comic series is beginning to wrap up some loose threads while leaving others dangling in front of us. What role, if any, does Suralinda have in the future, considering she’s not in the movies? What is going to be the fate of Agent Terex? Will we ever get to see some more interaction between BB-8 and Ivee? We only have one more issue to find out.

In this latest installment, Leia reveals that she had a tracker hidden in Padme Amidala’s old gowns which, unbeknownst to her, are floating through space right now, since Terex rightfully suspected a trap. Still, as Black Squadron is waiting around, we get this cute little exchange below, for fans who want to see Snap and Kare back together: 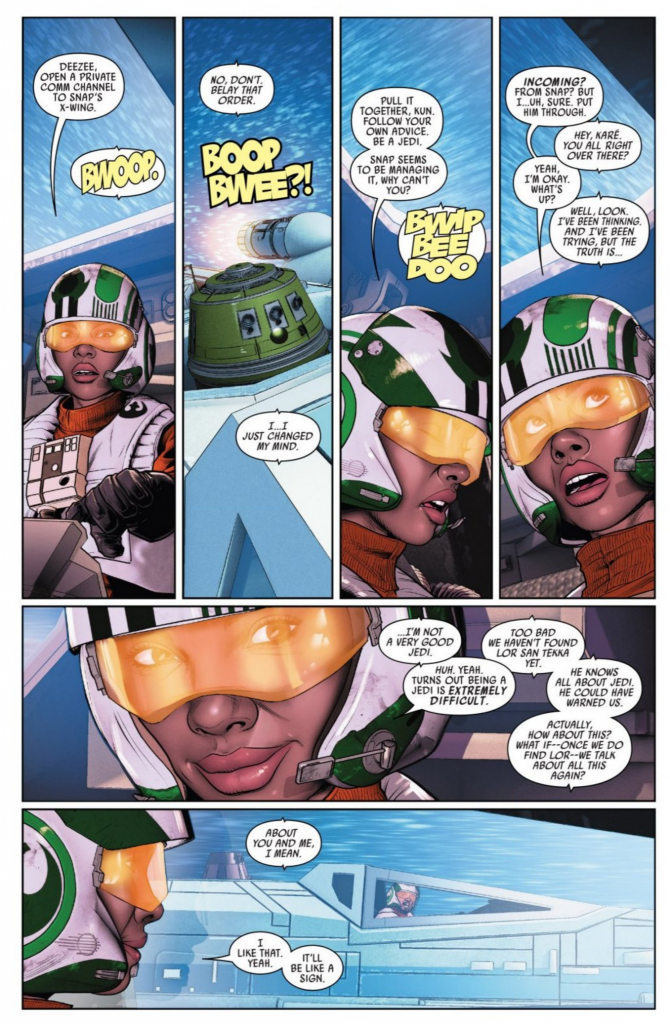 I think that that scene was probably my favorite in this whole issue. One thing that did bother me was that Poe was shown to be incapable of considering that ships run out of fuel. He tells Jess that he’s a pilot, not an engineer, but a pilot would definitely want to be aware of how much fuel a ship would be able to hold. I appreciate that the writers are giving Jessika her own realm of expertise, but I wish it didn’t have to come at Poe’s expense, which I’m admittedly sensitive about considering his treatment in The Last Jedi. The full exchange can be seen below: 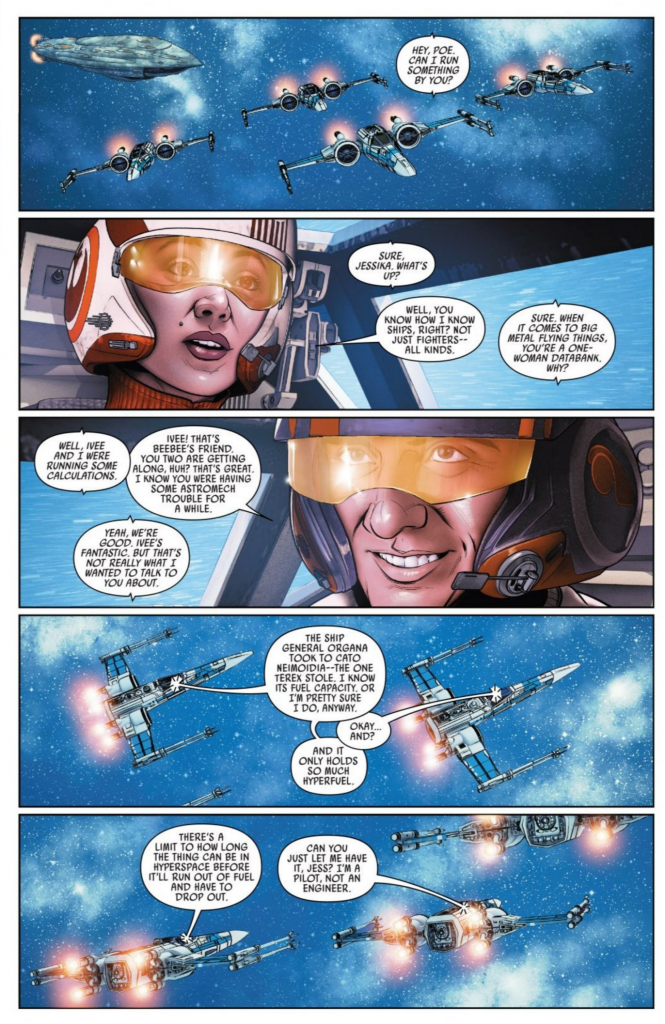 Overall, I think that this was an okay issue. I was concerned before that they were starting to get side tracked with too much filler and they were going to rush the ending, and that’s certainly true here. The majority of the issue consists of Terex heading back to the First Order and poisoning himself. In his deranged mind – which has probably gotten more unstable since the frequent headshocks, his head is literally smoking when he steps out to meet Phasma – he’s more use to the First Order dead or alive, even though he admits to Lor San Tekka that he’s done with them for good. Instead he tells Phasma that he has the antidote on his ship, and that he’ll tell them Lor San Tekka’s location if they remove the device from his head. They do so, and despite another Officer’s warning, Phasma lets him go, along with a suit of First Order Stormtrooper armor that he requested.

Cut back to Leia Organa, who feels like she’s lost all hope now that they’ve realized they have no way of tracking Lor San Tekka. Cue Terex: who calls them (how he got the codes for Resistance channels is quickly glossed over) and tells them that he gave the First Order the coordinates of Lor San Tekka. As he retrofits the armor with some bizarre looking equipment, he tells Poe that he is also going to send the coordinates his way in the hopes that the First Order and the Resistance will destroy each other, as he doesn’t really care who wins since he hates them both.

The final shot is of Lor San Tekka drifting through space looking concerned, as the amount of oxygen  that he has left is probably quite low.

Considering that we know that Lor San Tekka and Poe are together on Jakku at the start of The Force Awakens, it doesn’t really leave much suspense for the reader. However, it does put us in a good position for a solid First Order v. Resistance showdown in the final act.

So what did you think of this comic? Are you excited to see what’s in store for the final issue? Let us know what you think in the comments below!