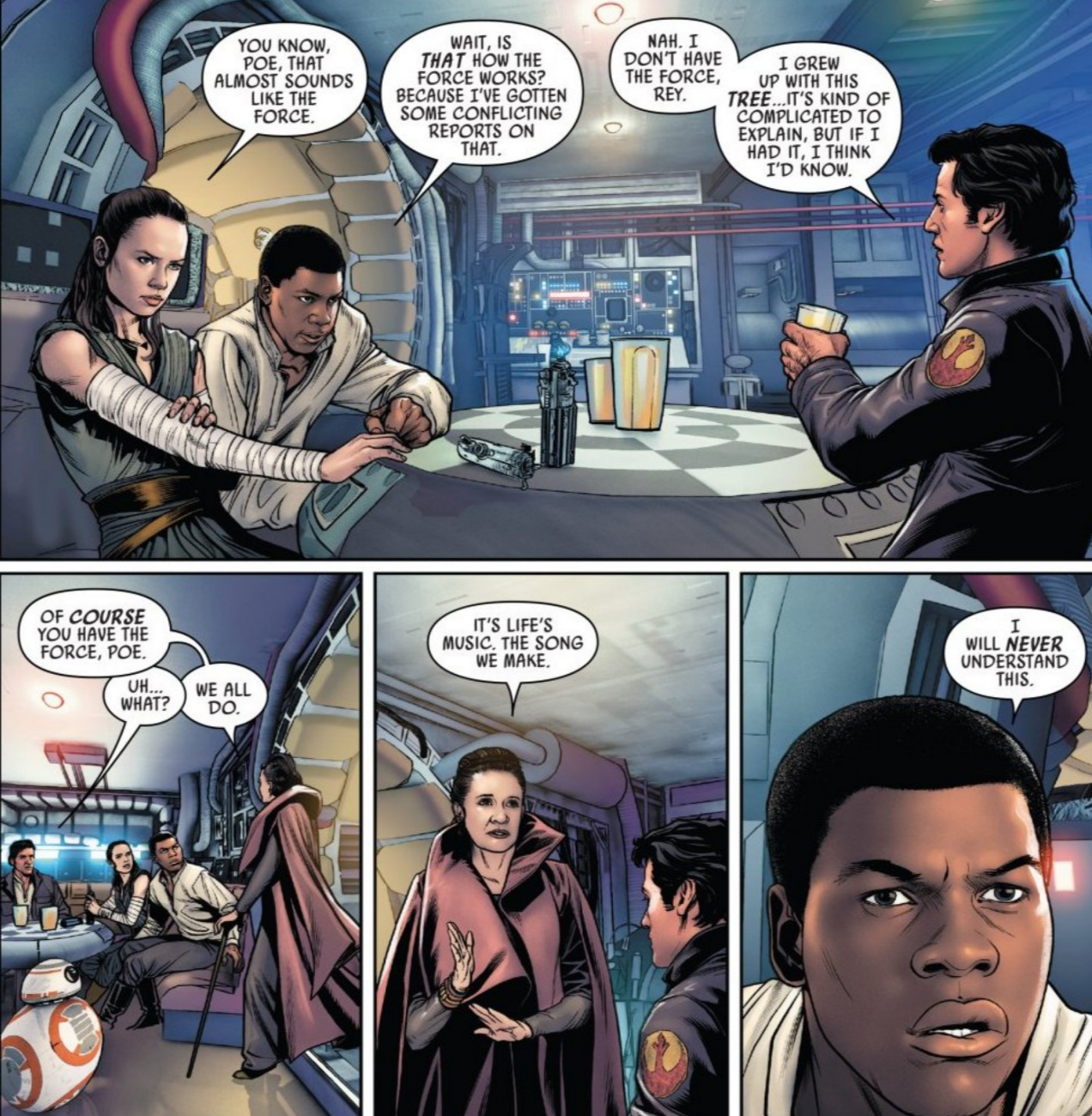 Warning: This post contains spoilers for Star Wars: Poe Dameron (2016-) #27. Head to a local comic shop and grab your copy before continuing!

So this installment leaves off pretty much where the last one ended, with Poe Dameron recounting his tale of what happened on Takodana. The issue doesn’t really offer too much more insight than that, and the installment ends with Poe and friends ready to finally take on the Starkiller Base. Fortunately, the comic is full of some stuff we know, like how the Millennium Falcon is full of porgs, to stuff we didn’t, like how Jess Pava built the scanner ship that got information on the First Order in the first place, and how Snap almost lost his life in the process.

But considering how things are usually a life or death struggle for Black Squadron anyway, that isn’t too much of a surprise. He and Kare exchange some cute banter, but both end up making it back to the Resistance base all right, and considering that he appears in The Force Awakens, the stakes that he was actually going to die were pretty small. 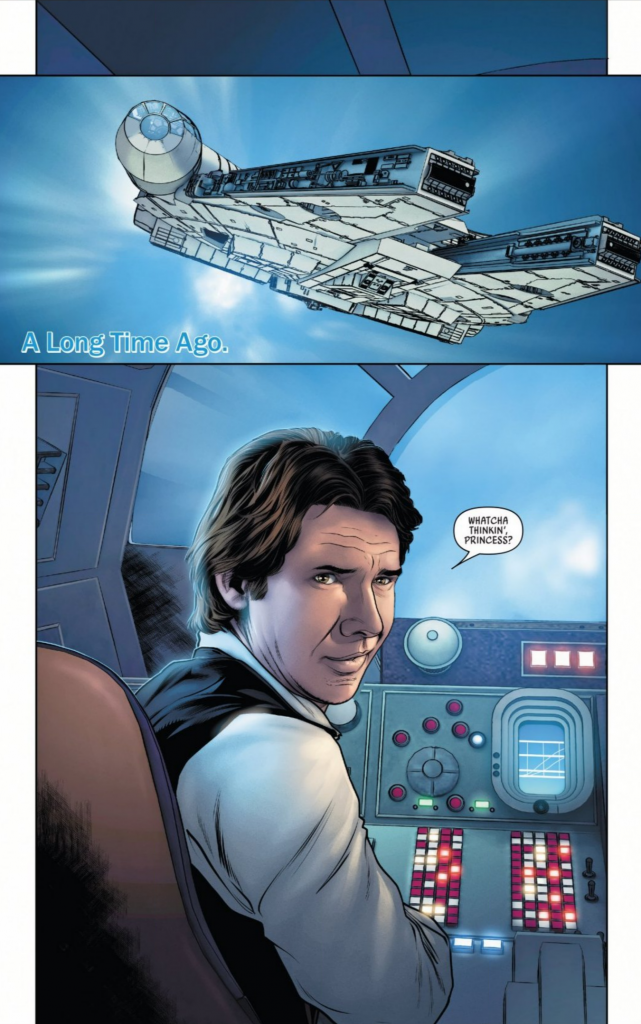 Fortunately, the comic does have a few high notes in continuing the story and helps clarify a few things to the audience. Leia is sitting in the cockpit with Chewie, and an echo of Han comes to her mind. It’s a sweet callback, considering that The Last Jedi didn’t give her much time to mourn. She heads inside (relinquishing control of the copilot’s chair to Nien Nub – huzzah!) to find our heroic trio talking about the Force. Rey says Poe has it, but he dismisses her, despite mentioning growing up with the Force tree that many are familiar with (Luke Skywalker had two Force trees, one he gave to Poe’s parents and they planted it on Yavin IV, where Poe grew up).

Leia enters at this point to say that they all have the Force, and she’s not wrong. Everyone does have the Force, since everyone has midichlorians inside of them. The only thing that the comic doesn’t explain is that everyone has different levels of midichlorians, and those with abnormally high levels can harness the Force and manipulate it and use it better than others…but I guess they assume that we’ve all seen the prequels, and that doesn’t need to be explained any more than it already has. 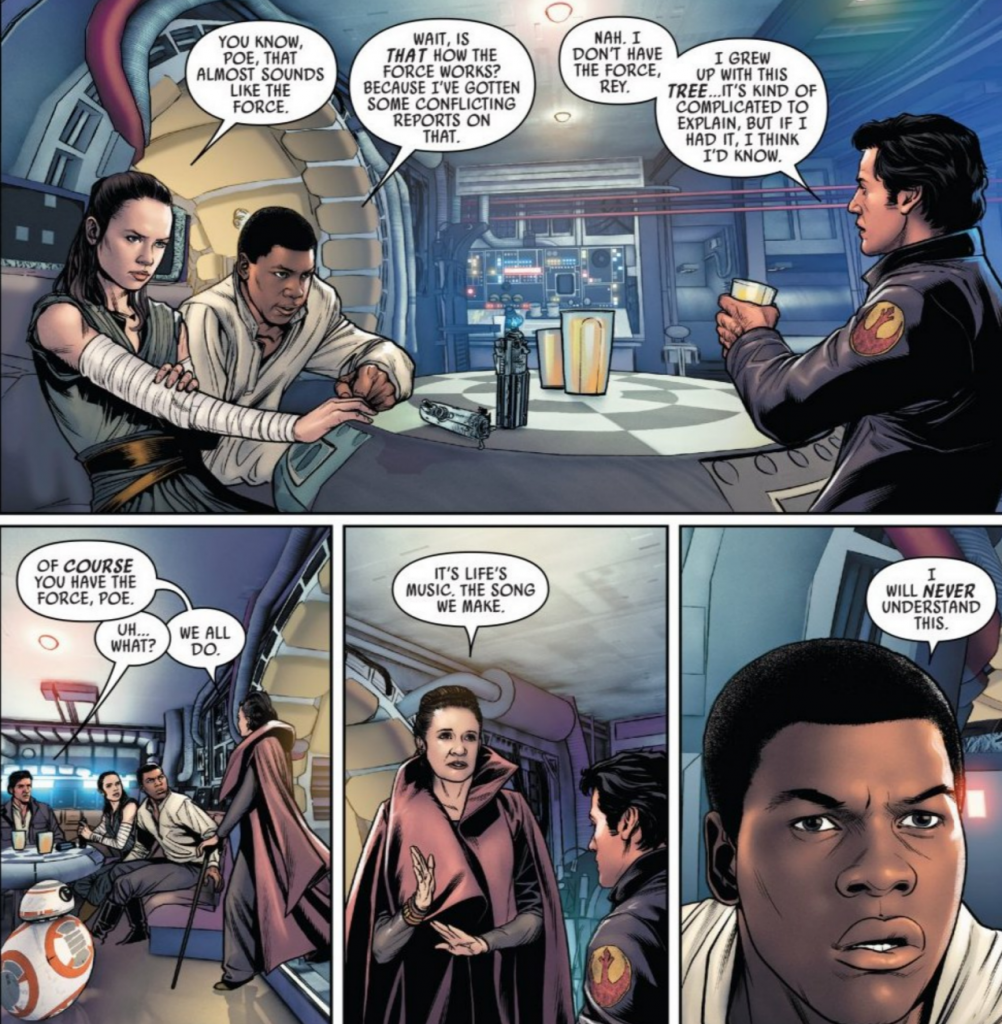 The funniest part is Finn asserting that he will never understand the Force. Maybe he will, maybe he won’t, but I would love for that to be a subtle nod that he’s actually going to be able to use the Force in ep9. Finn’s Force sensitivity has been hotly debated since The Force Awakens, and it would be great to see John Boyega with his lightsaber in his hand again. 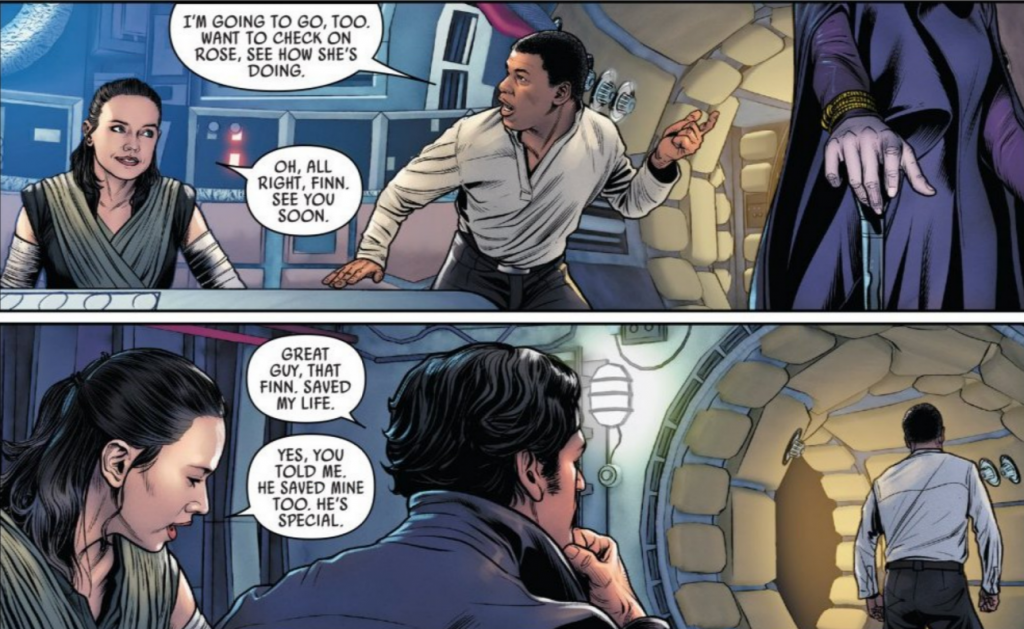 Otherwise, that’s pretty much all that the comic shares. There’s a scene where Finn leaves to check on Rose (I guess that girl is still in a coma) and both Rey and Poe talk about how great Finn is, with Rey calling him “special” and Poe calling him “a great guy.” Poe and Rey continue to talk, and Rey shares a little bit about what happened to her on the Starkiller Base, including how she was tortured by Kylo Ren. A few people have attempted to defend Kylo Ren and have said that Rey wasn’t “actually” tortured, citing the juxtaposition of the pain Poe experienced at the beginning to Rey’s ability to fight back as evidence. At least this part of the comic should clear up any confusion that Rey firmly believes that she was tortured, and Poe teasingly calls them “torture buddies” in a weak attempt to lift her spirits. 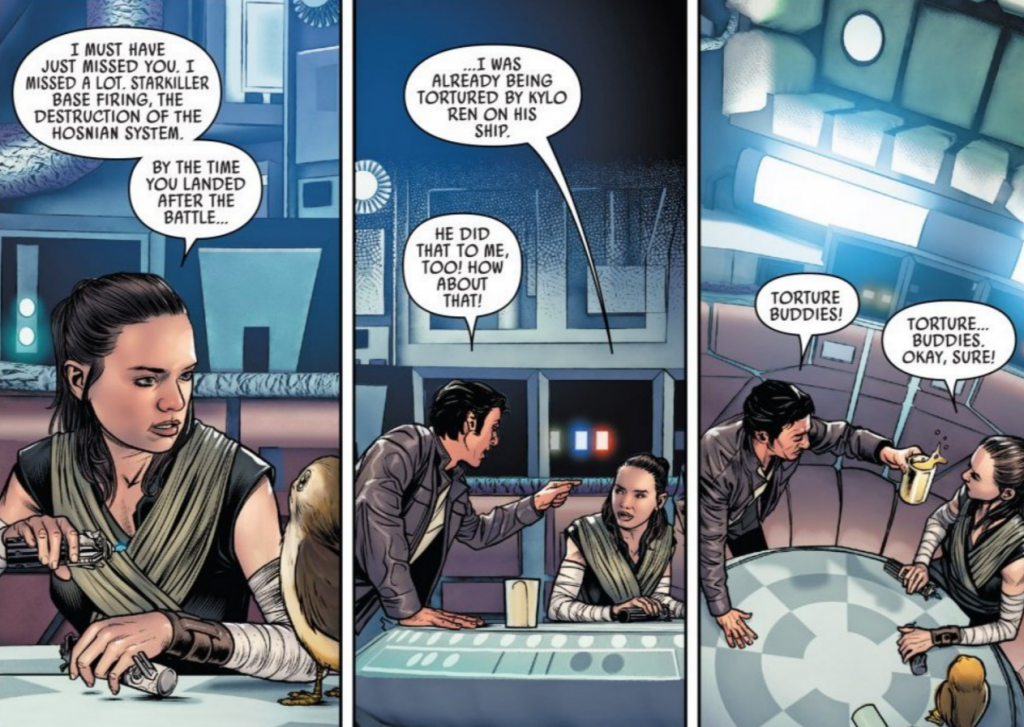 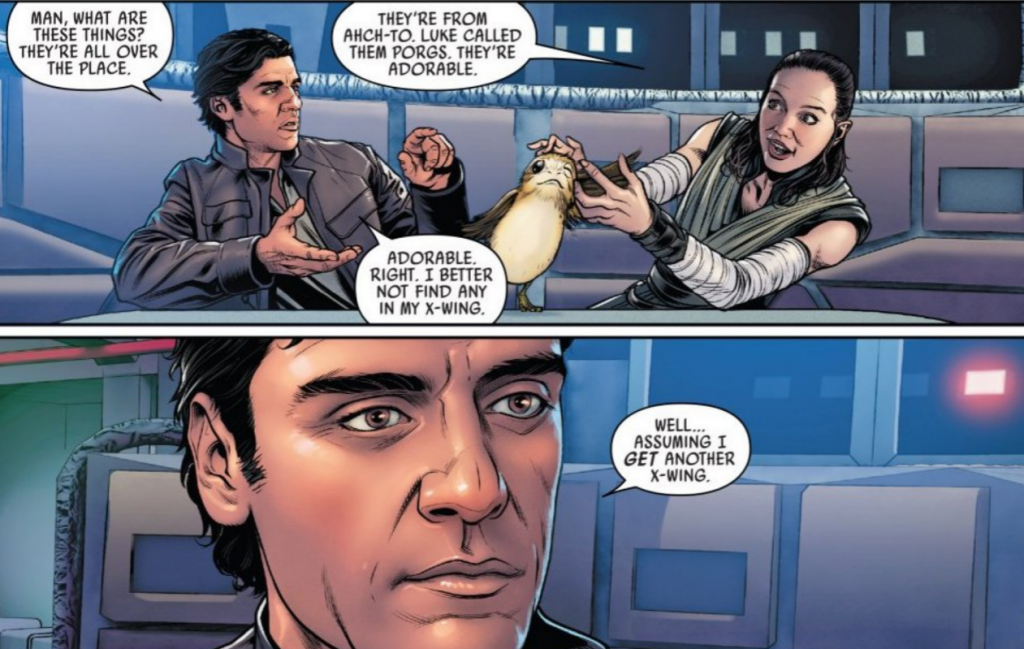 Poe also warns Rey that he better not find any porgs on his X-Wing, should he get another. Considering that his primary role in the sequel trilogy is as the ace pilot, I don’t doubt that he definitely will. The Lucasfilm marketing team will make sure of it.