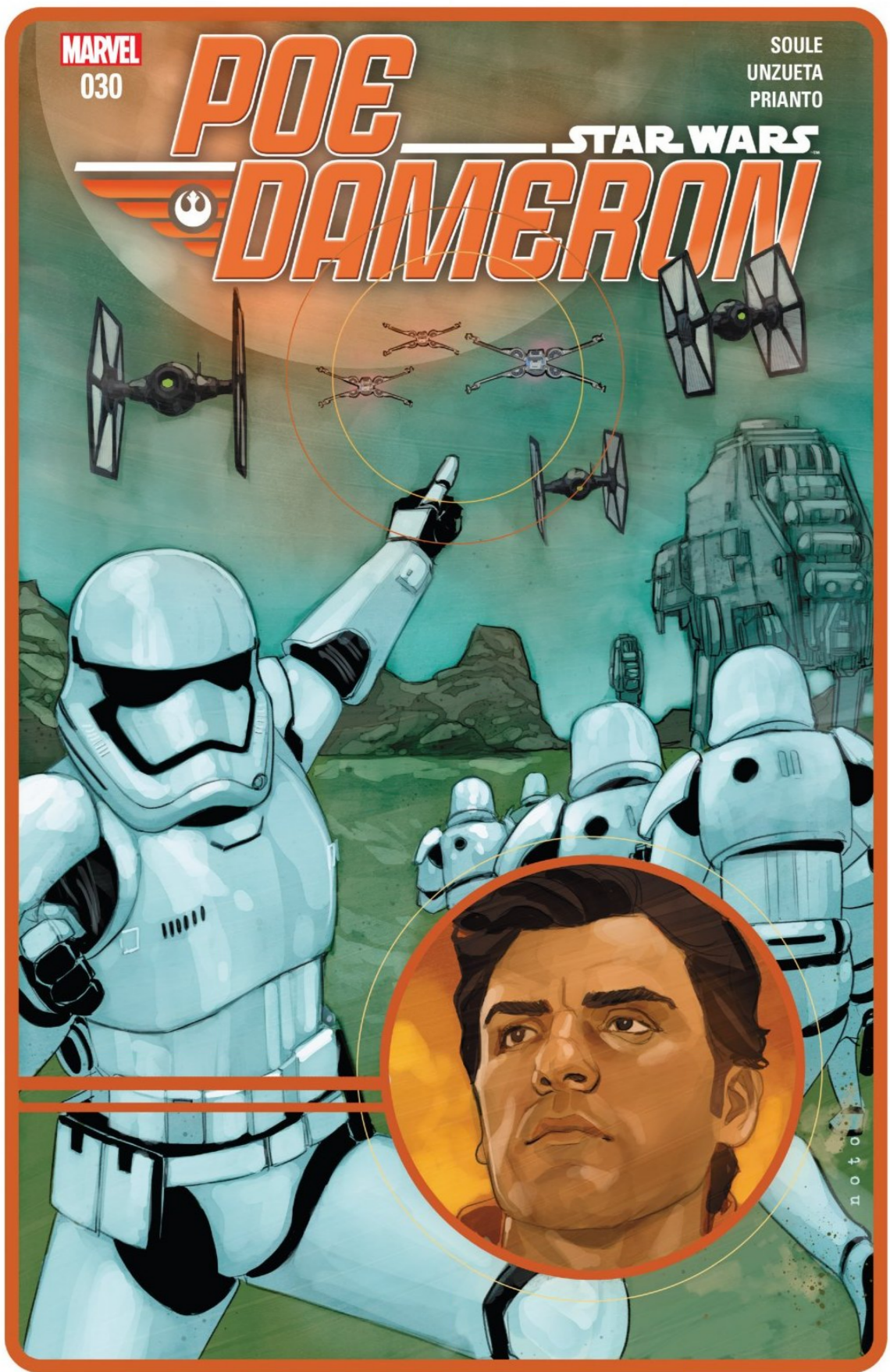 Warning: Spoilers for issue 30 of the Poe Dameron comic ahead.

We’re finally here, folks, at the dreaded penultimate issue of the Poe Dameron comic. Considering the issue was first released on April 6, 2016, we’ve watched Poe Dameron and the rest of Black Squadron come a long way as they achieved their mission of finding Lor San Tekka.

However, it’s possible that a good thing might have gone on a little too long, as we’ve now followed them past the Battle of Crait from The Last Jedi and the well of new material seems to have run dry. This issue shares the same problem as its predecessor: it’s just too darn short.

The story continues to be narrated by Jessika Pava through encrypted files, and that’s fine, but the overall flow of the issue felt as stilted as the last, and it’s clear that this issue was, again, just a build up to something much greater: the finale.

While a comic with such a great run should have a great finish, this doesn’t feel like the same satisfying arc that other missions have had. While we are invested in the fate of Black Squadron, it almost feels as though they’re just going through the motions. While their fate is left uncertain, the weight of their mission to recruit allies to the Resistance just seems a tad lackluster. It shares the same problem as The Last Jedi in the sense that there is no real sense of scale.

In the first issue concerning this arc, we watched them visit one planet and screw things up there. In this issue, they visit another planet where things are…kind of already screwed up. While their mission of recruitment seems to fit a much larger, galactic scale, we only saw them visit one planet before moving on to what appears to be the final stage. It’s like beating the first level in a video game only to discover that it was basically only a tutorial mode and the fight to get to the final boss is really only what’s left. It’s that disappointing sense of, “…oh, is this all we’re getting?” that leaves us walking away from the issue with a lingering sense of disappointment and suspense for the final closing chapter in this saga.

Not too much happened in this issue, but I’ll begin at the beginning. Poe is still watching Jess’ narration when C-3PO comes in to tell Poe that he found another encrypted node. Poe follows up with an off-the-cuff joke about another Starkiller that doesn’t feel all that funny considering the circumstances. It’s a bit, well, off from the rest of Poe’s usual humor, and as some of my readers on Tumblr pointed out, a lingering symptom of Poe’s poor characterization from The Last Jedi. 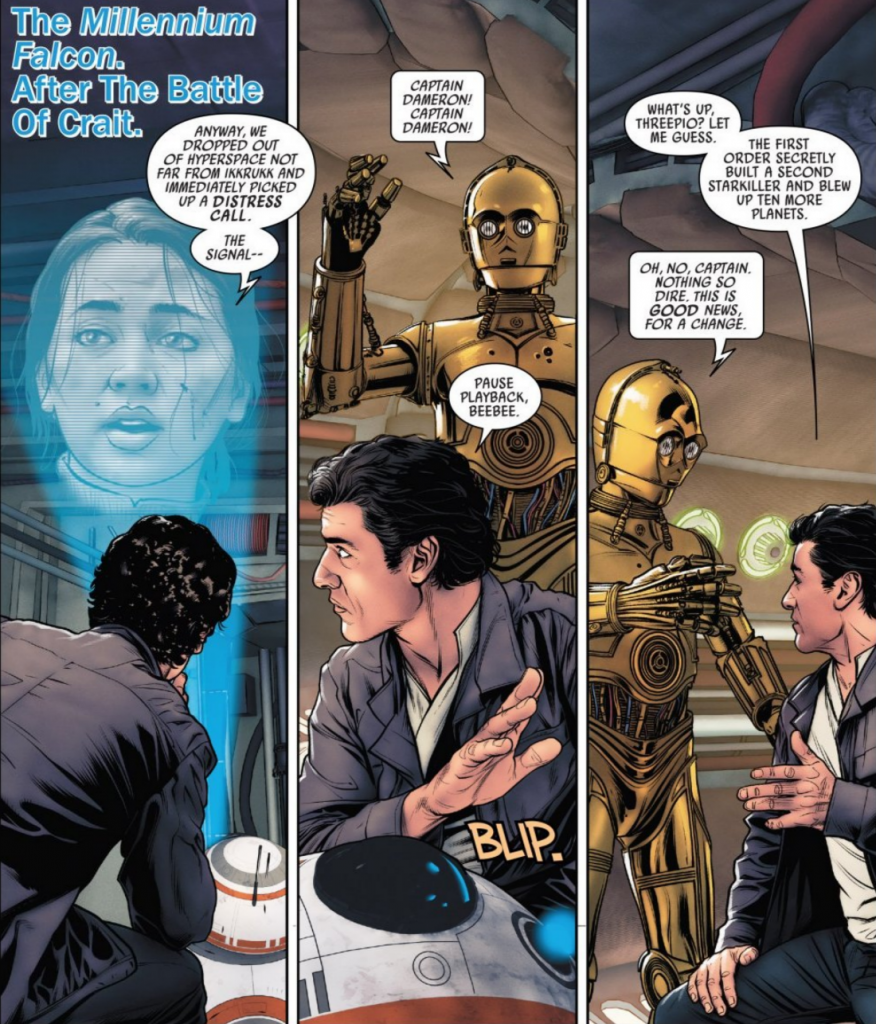 Despite this narration, Jess’ narration continues as she teases Black Squadron’s new motto and basically repeats the mission objectives from the last issue: find planets that could be useful to the Resistance in the fight against the First Order. 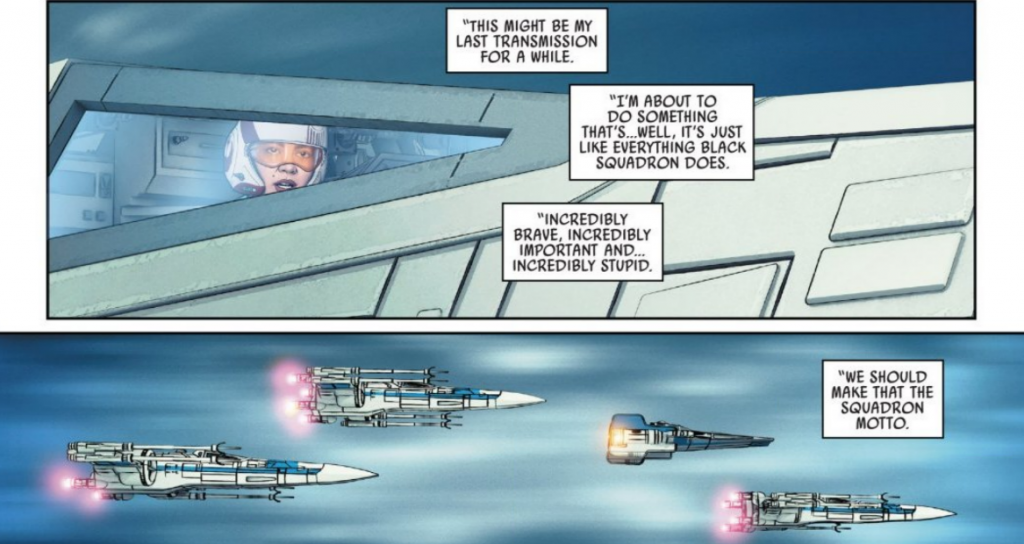 They arrive at a planet called Ikkrukk, which sounds like the kind of name you give a planet when you push your sleeping cat off your keyboard at three in the morning and can’t come up with anything better. As Jess narrates, the planet is currently under siege from the First Order. They’re protected behind a planetary shield, but apparently First Order sympathizers, as they’re called in this issue, shut down the planet’s defense grid, which should have been strong enough to hold off any First Order attack. Considering how Leia enthused their defense grid specifically, it doesn’t seem like they’ll be able to be of much assistance in the upcoming Episode IX installment. 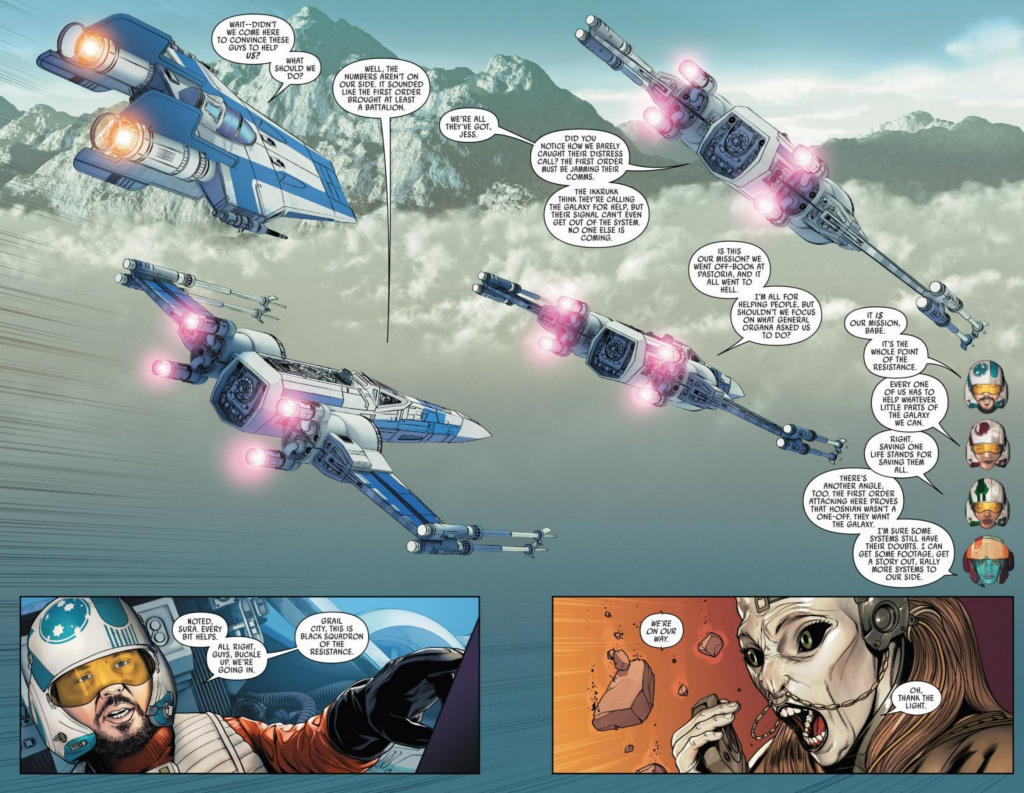 There’s a bit of a back-and-forth as to whether or not they will come to the planet’s aid, but it all just feels like mindless banter, because of course they’re going to assist. They’re Black Squadron. It’s what they do, and considering their penchant for getting involved in the plight of other’s when they probably shouldn’t, it’s no surprise that they’ll step in here as well. The plot demands their intervention, after all.

Fortunately for them, Jess is familiar with the technology in the defense grid from her time in the Republic Navy. While Kare and Snap stay back to give the TIE Fighters a distraction, Suralinda Javos and Jess race towards the gate the Ikkrukks made in the shield. But, as with every good action flick, the timing is off by a hair, and Jess ends up losing her fighter as a result of the crash. 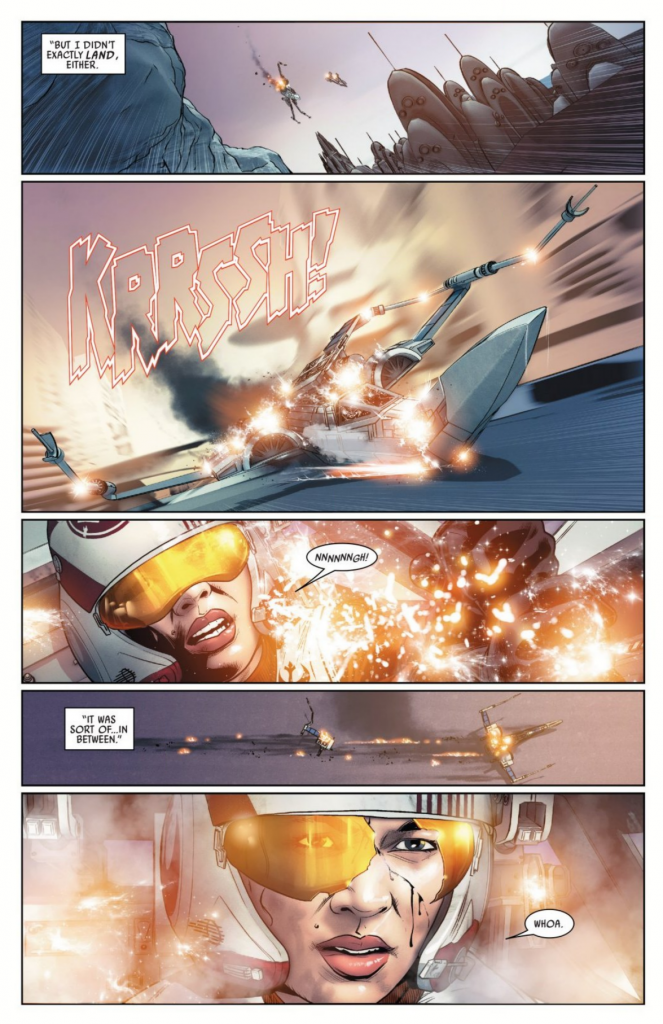 And that’s where the first node cuts out. Poe says that he’ll have to wait for the next installment, only to have C-3PO show up with it immediately. The transaction feels a bit forced, and it feels almost like it only served to remind us that Poe Dameron and C-3PO are in this story as well.

This last message, however, does lead us to the end of the comic, with Jess’ life in danger and Suralinda Javos potentially dead, as she lies on her back with a smoking blaster wound in her chest. 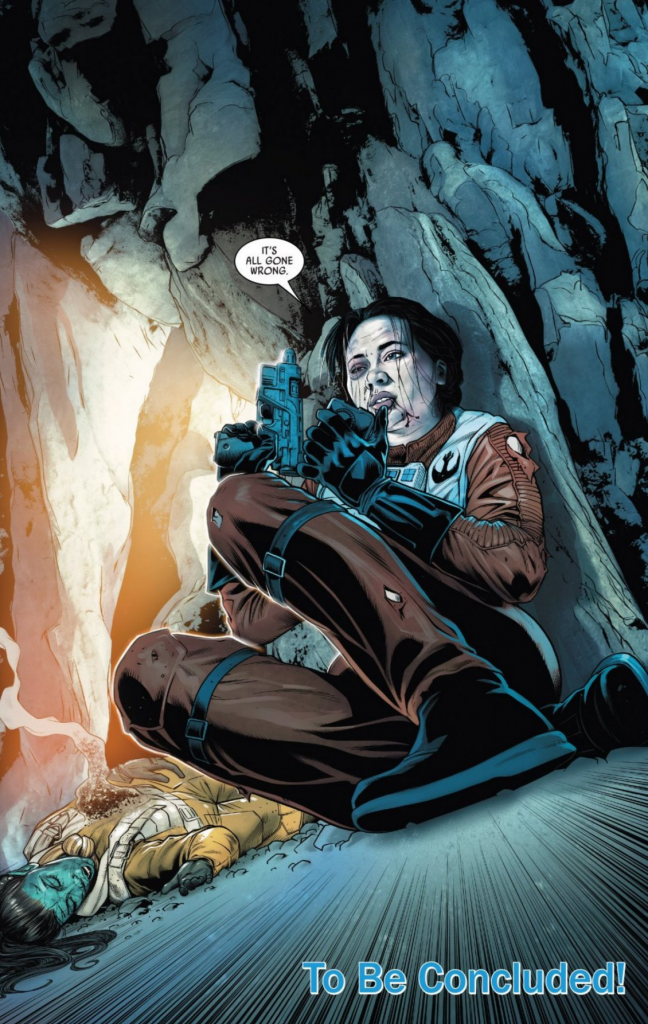 It’s a bit disappointing that the issue ends here, right when the real meat of the issue looks to be starting. It does hopefully lend to an exciting final chapter, but it almost feels like there is too much at stake for the next installment to be the last of the entire comic’s run. Is Poe going to rush off to try to save them from their fate? Or are we only going to learn their fate in the still untitled Episode IX? While Greg Gunberg, who plays Snap Wexley in The Force Awakens, didn’t confirm his reappearance, he did hint that he was growing out his beard, which could be a sign that we will see Snap again. But what about the fate of Kare Kun? Jess Pava? Suralinda Javos?

I guess we’ll have to wait for the final issue to drop next month before we come to any better conclusions about what awaits us in Episode IX. While the issue has the opportunity to leave us in another cliffhanger of suspense, I have a feeling that they’ll wrap up the story in a pretty satisfying way for Black Squadron, while still hinting at what else is to come for our Resistance heroes.

So how did you feel about this issue? Did you feel that it was too short? Or did you enjoy seeing Black Squadron before their final encounter? Let us know in the comments below!