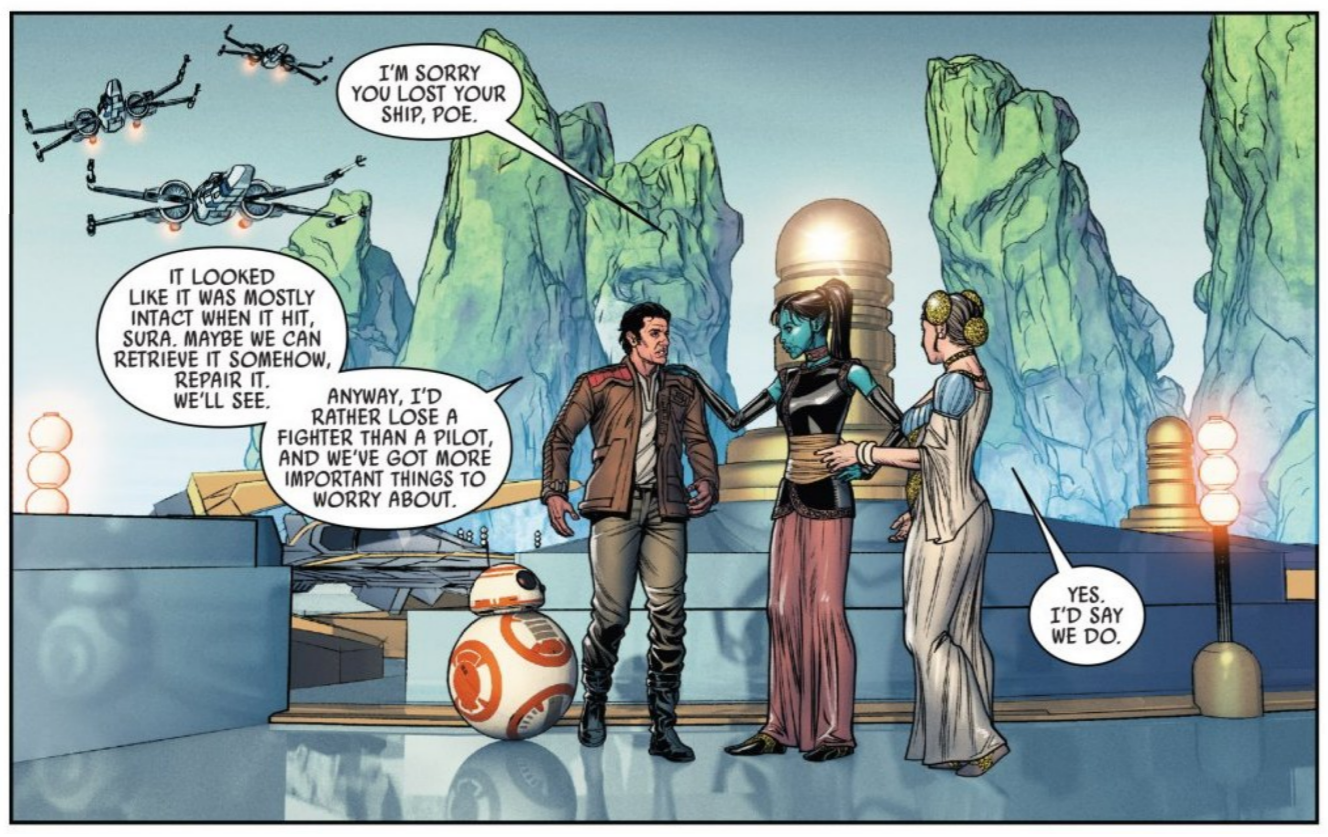 This was a great chapter in the Poe Dameron franchise, only because it once again highlighted the positive aspects of Poe Dameron. Respectful of those in authority, he kept a cool head during battle, and prioritized savings the citizens and his squad mates ahead of his own live. He even risked a death-defying maneuver trying to rescue BB-8 before his stolen Black One crashed to the ground.

This chapter had a few great elements, but some bad ones. Admittedly, this was a bit of a filler chapter, but I think that’s to be expected. We’re slowly closing down to the final installment in March, so there are only 2 chapters left to rescue Lor San Tekka from the First Order. Now that Agent Terex has Lor San Tekka and is going to try to use him to exchange for his prior esteem in the First Order, it’s a race against the clock to see if the Resistance will be able to save him in time.

Spoiler alert if you’ve seen The Force Awakens: they do. 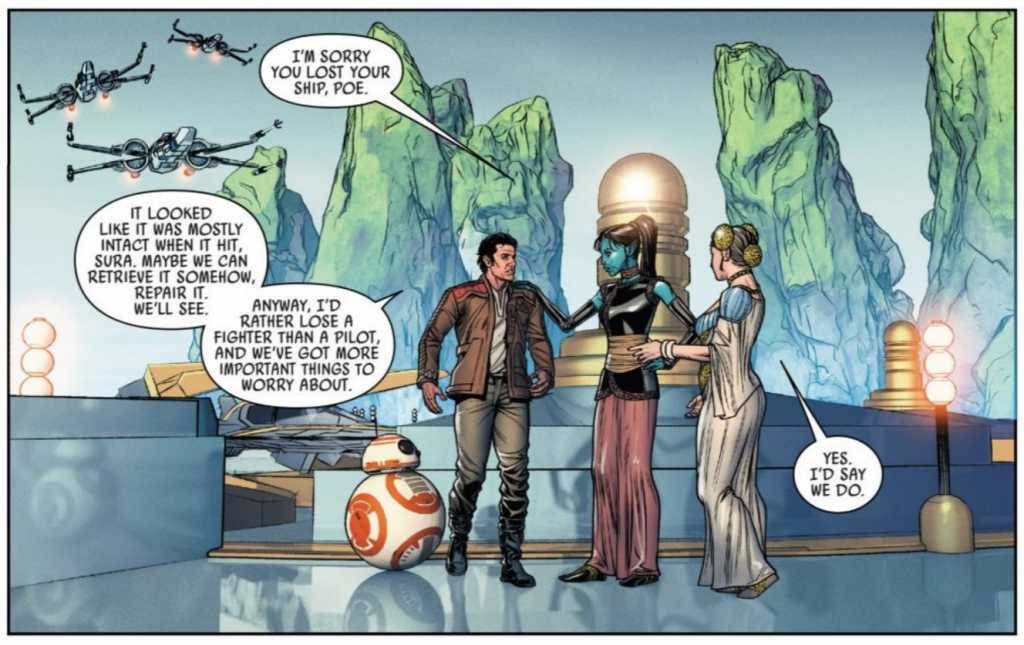 I think by far my favorite part of this comic comes from above. Poe just lost Black One, his favorite ship, and yet he was just worried about the civilians down below and his own team, Black Squadron. I’d rather lose a fighter than a pilot, he says to a concerned Suralinda. And we’ve got more important things to worry about.

It’s great to finally see Poe back in his element and where he exists as a character, because this is who Poe is. We never saw him grieve for the pilots lost in the opening battle of The Last Jedi, and that was who Poe is. He cares about people, greatly, and to see him use his pilots like pawns on a chess board doesn’t line up with his character at all. If there’s one saving grace in this franchise, is that the Marvel writers of this series seem to understand who Poe Dameron is, which means I don’t think we’re going to lose what makes this comic series special in the first place. 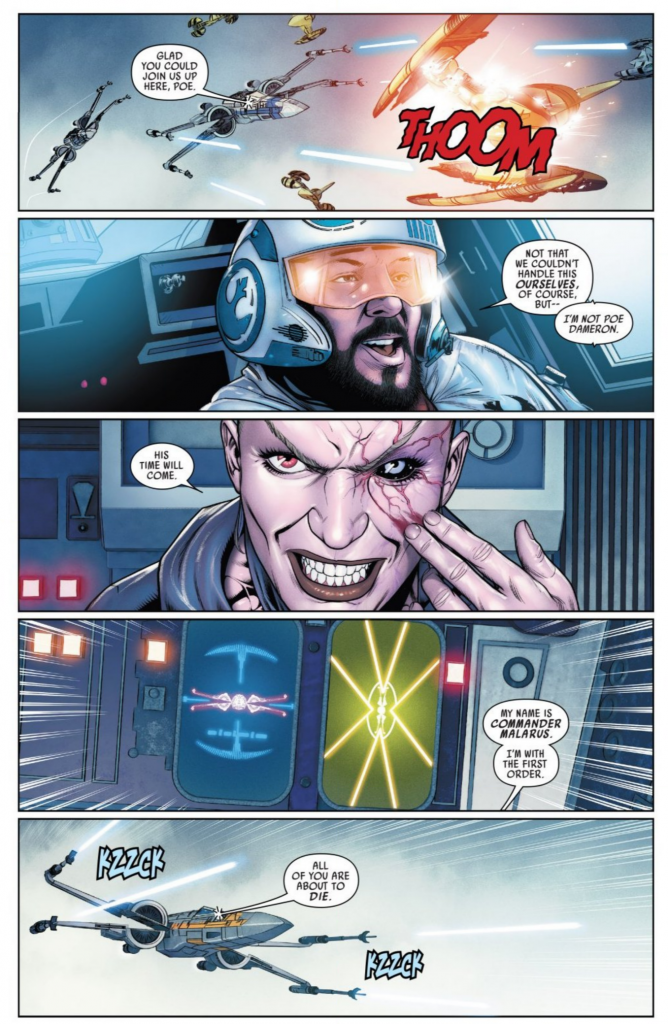 Early on, Commander Malarus teases that she is going to destroy the entire Black Squadron. Even Poe is concerned because, as stated, his team won’t know that it’s not him flying Black One. Fortunately, Commander Malarus gives herself away, which allow Black Squadron to try to evade her. I’m honestly not sure what compelled her to give herself away – probably hubris – but the trope of villains revealing themselves too quickly or announcing their plans right away needs to die a fiery death. It’s a bit cliche and disappointing. 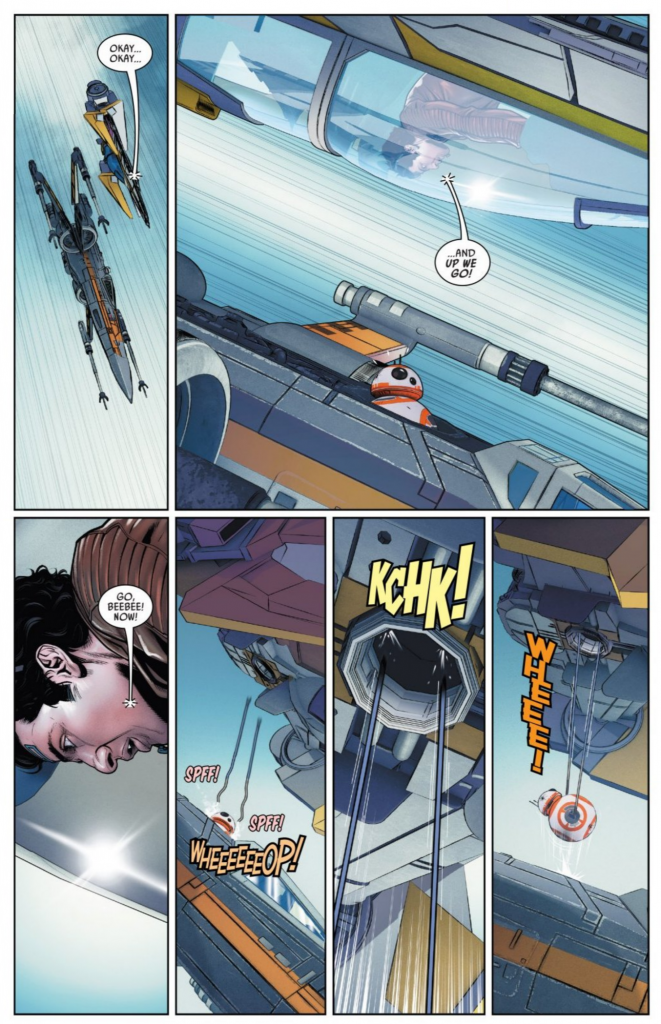 In one of arguably the best scenes of this installement, Poe Dameron risks his life in a death defying move in order to try to save BB-8 from a crashing Black One. The deeper look into their relationship is probably one of the best things about this series. 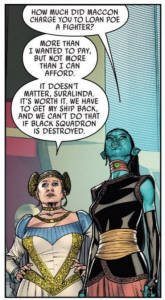 I think the last thing that I wanted to touch on was how General Organa loaned an enormous sum to Maccon in order to loan Poe a fighter to try to take out his stolen Black One and save Black Squadron and the city. General Organa offers that it was, “More than she wanted to pay” but how much money does she have, exactly? How much money does the Resistance actually have in order to fund their entire operation? It seems to be less than the First Order, but how did she accumulate what she did have? Does Han’s smuggling help to support some of it?

I think one of the most troubling things about this series so far is that we are given troubling little information as to just how the First Order rose from the ashes of the Empire and how the Resistance grew up from a disgraced Senator (Leia Organa) into what it is today. Granted she has connections, but enough to fight a full scale war, especially with the New Republic completely decimated? As The Last Jedi showed us, they have less reserves than we think, which brings up a good question: how is this a war the Resistance can win?

The answer? I guess we’ll find out in Episode IX. Fortunately we don’t have to wait quite so long for next installment of the Poe Dameron series, which comes out next month. See you then!