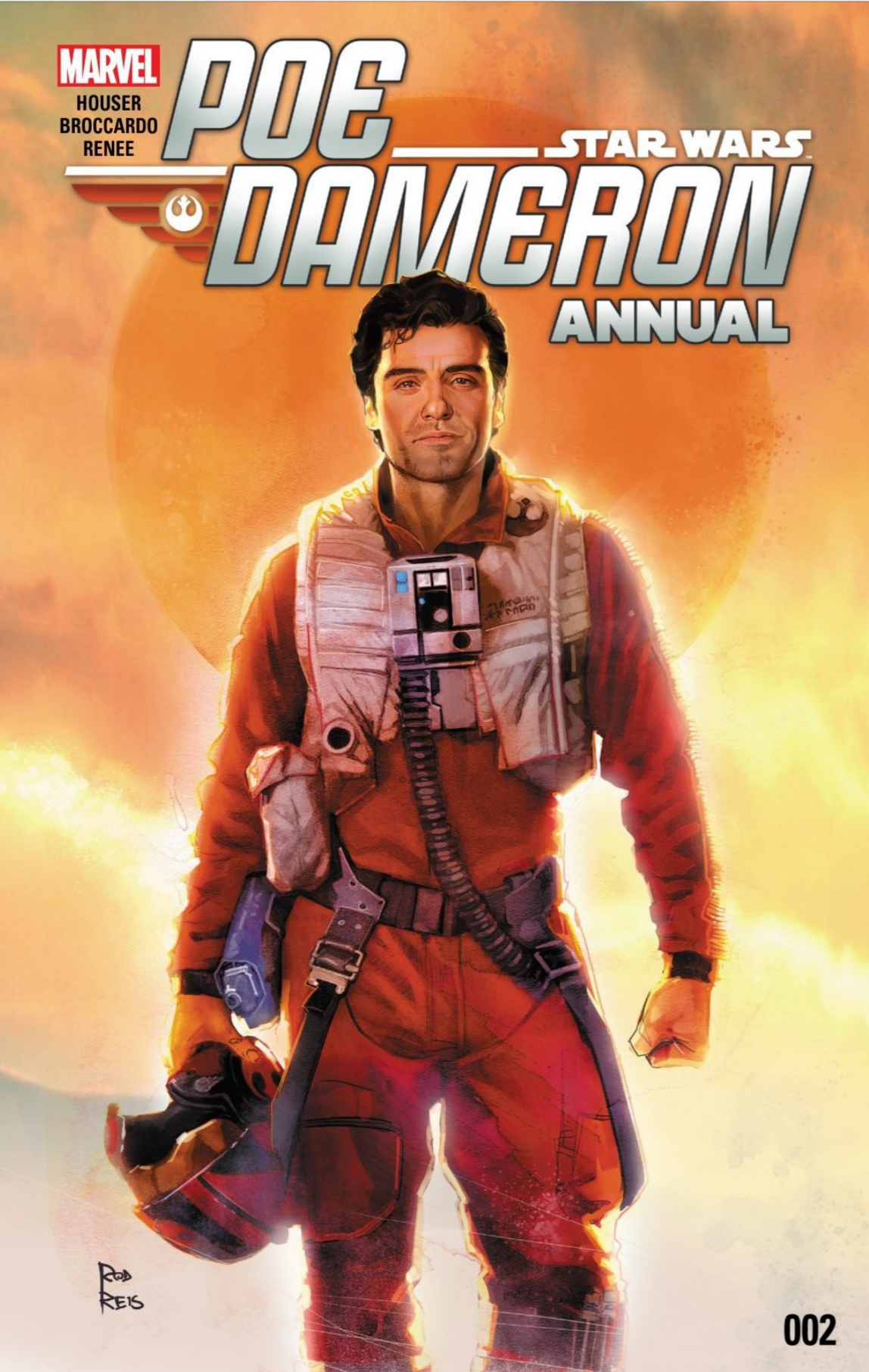 I’m still trying to figure out how to feel about this issue. Considering how Poe Dameron #30 took place after The Last Jedi, it was a bit jarring to jump back into what things were like in the formative years of the Resistance, especially in a time when Han Solo was still alive and smuggling.

I had mixed reactions to the writing. I thought that the pace of the comic felt rushed, with details of the plot being left purposely murky and vague so as not to confuse audiences further. The comic opened up a lot more questions than it answered, especially as far as Han Solo was concerned, but seeing him again was definitely a pleasant surprise.

The best thing that I have to say about the writing is that the characters felt like themselves again. In #30, Poe still felt like a stilted caricature between his The Force Awakens and The Last Jedi appearances, but the writing here seemed more “on point” with how Poe has been written in the comics thus far, more similar to how we got to know him in The Force Awakens. I felt that Leia’s lines were especially on point, and you could almost hear Carrie’s voice in your head while you were reading.

Unfortunately, I felt that the art design in this comic was severely lacking. Maybe it’s just because I’m more familiar with different artists, but I felt like the characters never really looked like themselves. From the very first illustration on the first page, I felt like Leia Organa didn’t really look that much like Carrie Fisher, and you couldn’t really feel her emotions from the illustrations as you can in other comics.

The comic opens with a familiar quote from Rogue One, which is a pleasant nod to the film if you enjoyed it, and probably more of a cringe-worthy one if you didn’t. 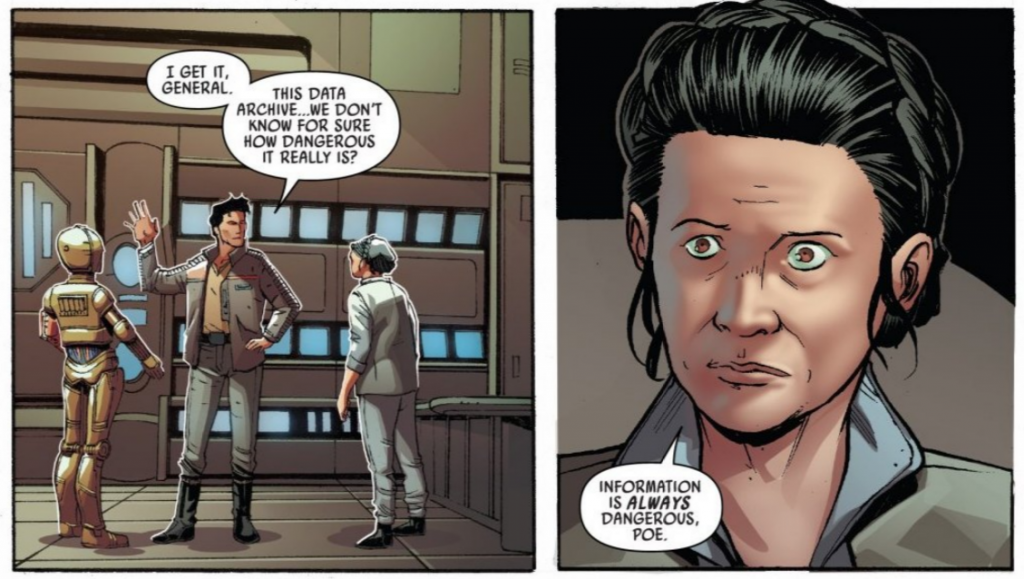 Basically, Leia needs Poe and the rest of Black Squadron to retrieve a data archive that’s currently in the hands of a Kudon trader. The data archive is rumored to contain blueprints for a superweapon, but beyond that, the precious metal that it’s composed of could buy a small planetoid, and the Resistance is in desperate need of funds. Apparently, the First Order is also interested in this data archive, and so C-3PO plans a heist: dress Black Squadron up as smugglers to disguise any Resistance involvement and grab the data archive before they do.

While Black Squadron isn’t loving their smuggling ships needed for this mission, we find out that the “First Order” deal consists of an undercover Han and Chewie, who are looking to throw some people they owe money to off their backs by grabbing the data archive for themselves. Of course, the plan goes haywire when it’s obvious that they’re no First Order stooges, and Poe and co. arrive just as the blaster bolts start flying.

While Black Squadron holds off air defenses, Poe runs into the base with BB-8 as they try to locate the data archive before the “First Order.” Han and Chewie, who arrived first, beat them to it, and Han opens the data archive to find a leftover piece of Alderaan history. 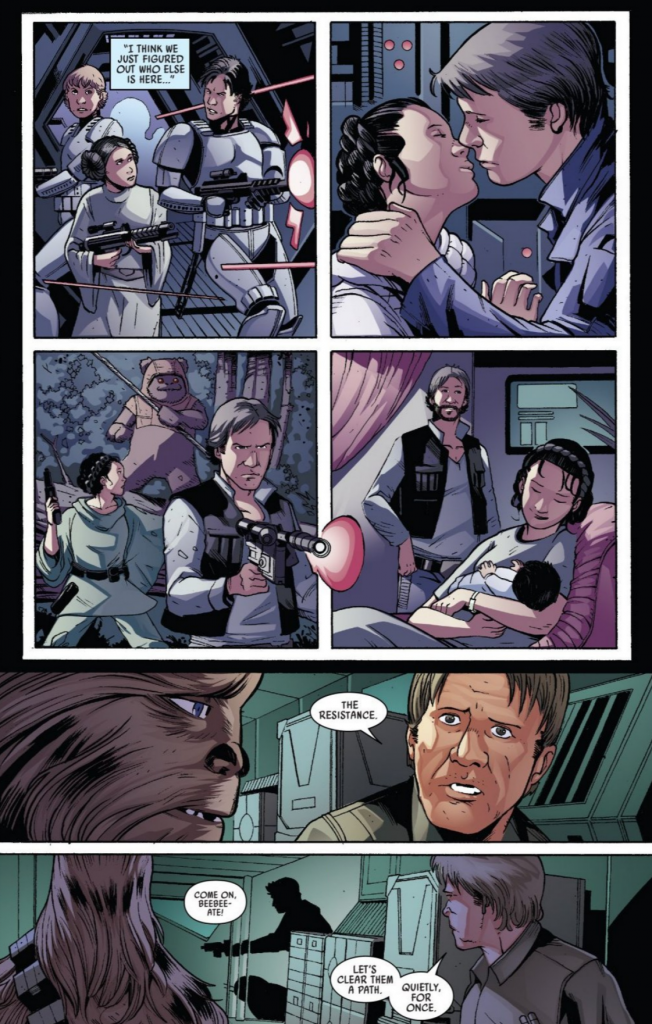 Realizing that the archive is better off with Leia, Han and Chewie sneak off to take out the rest of the guards to give the Resistance team an easier shot of escape. Without making their presence known, they slip away in their First Order ship, broadcasting as a friendly craft on secret Resistance channels to make sure they didn’t get blown out of the sky.

Poe easily finds the data archive, and quickly makes his way back to Leia. He explains that whoever was in the First Order ship broadcast on Resistance channels not many people know about. They didn’t take the data archive, they seemed to help them out, and not only that, but Poe recognizes that the firepower that took out the guards was done by some kind of projectile weapon. (*cough* Chewie’s bowcaster *cough*)

Leia shrugs it off with a, “I guess we’ll never know” attitude, but it does seem that she has an inkling that Han was involved. It’s revealed that the archive is none other than the Archive of the Great Library of Alderaan, which was smuggled off world when the librarians feared Imperial invasion. While Poe can’t believe that Leia would sell off something clearly so valuable to her, Leia shows the same kind of fortitude and resolve that so many have come to love about her character. 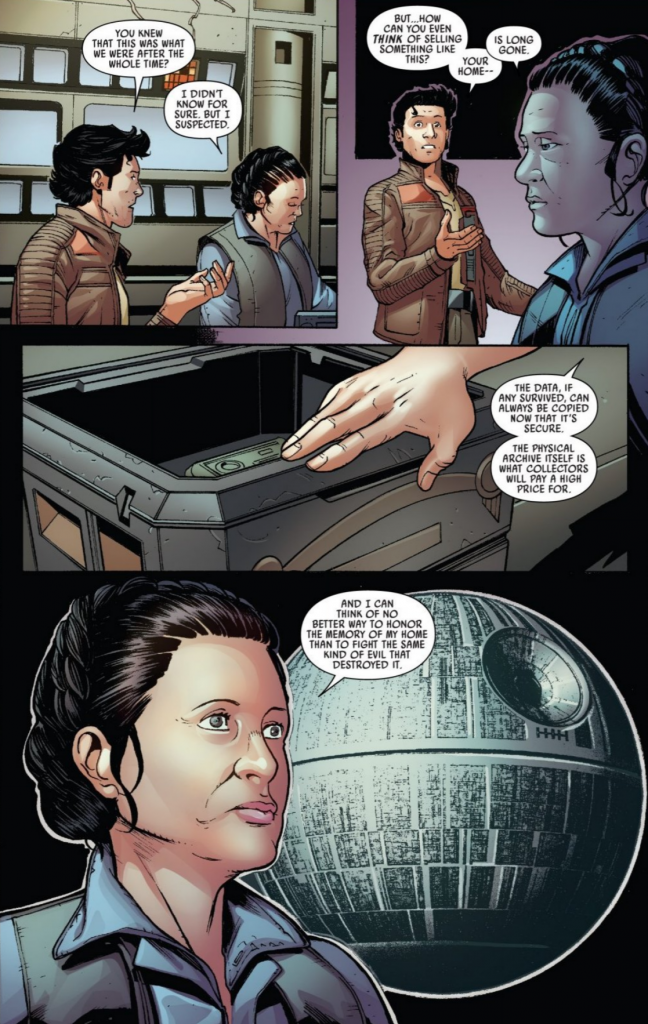 The comic wraps up on a nice note, but at the same time, I still can’t help but feel that there was something missing from the issue. It seemed too fast-paced to me, and I think that I’m a bit disappointed that we never actually saw Han and Chewie interact with the Resistance at all. It does fit in with Han’s reluctance to see Leia in The Force Awakens, (“She doesn’t want to see me…”) but it would have been cool to see regardless. The comic did have some nice flashback banter between L’ulo and Poe which I loved, especially this line in particular: 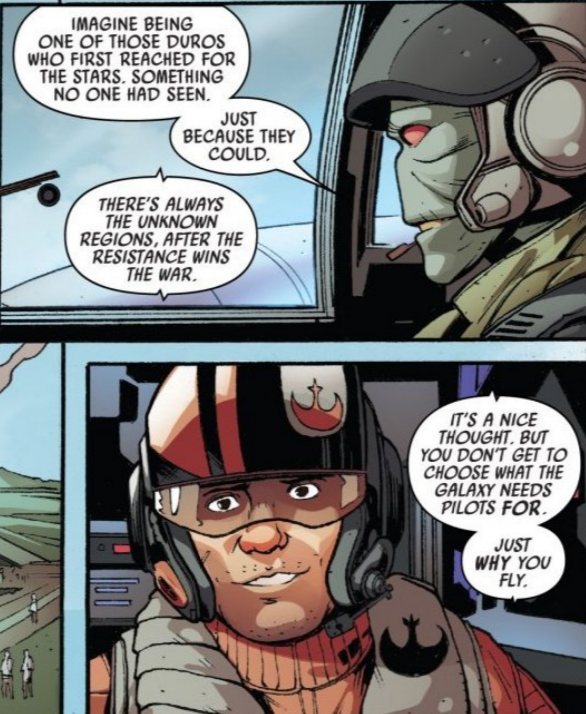 So what did you think about this issue? Did you enjoy seeing Han and Chewie again? Were you put off by the different artistic style? Let us know your thoughts in the comments below and, as always, May the Force be with You!