The running joke I’ve heard since I started collection Star Wars Funko PoP! figures a couple years ago, was that this is the current “beanie baby product” and at some point the market for these will bust and that you could pick up figures at a dime a dozen.  I always brushed it off as a joke and laughed and never thought much of situation.  But you can’t really blame the people that are making these comments as some PoP figures are selling for insane prices on the secondary markets. 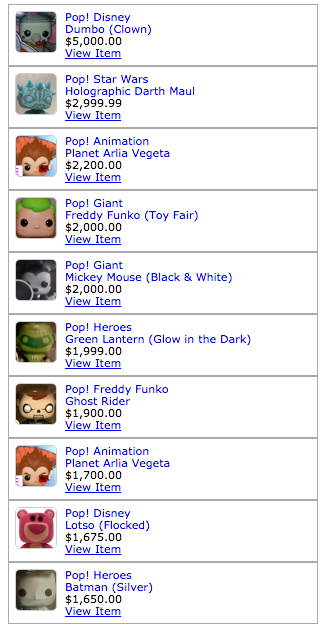 As you can see in the photo to the left here. There are some crazy prices on some PoP! figures that I will never be able to afford with my current level of income.  Not to say that I don’t want the figures but there is no way in hell that my Wife would allow me to purchase them at the prices they are currently running.  Heck just over the past month or so the Holographic Darth Maul has jumped up approximately a grand.

Maybe these predictions, that no one wants to believe, are really the truth and at some point our collections are going to be more worthless that a Nerf Herder.

So last month I wrote an article about the insane amount of Star Wars PoP! figures that Funko had released over the past quarter and that didn’t even dive into all the other Funko related products that aren’t the “bobble heads”.  Since writing that article there have been numerous other PoP! figures that have been released or that we have heard news of their upcoming release.  It really is mind blowing when you break it all down and look at the numbers. You can check out that article here.

We even just got announcements over the past couple weeks that some of the Funko subscription boxes were cutting back their “annual” memberships to just monthly or bimonthly subscriptions.  Is this a heads up that Funko might be slowly getting out of the subscription boxes that so many of us love and pawn over, waiting for the mail to arrive so we can unbox our “precious” goodies.

What’s really scary is when you start looking at the retailers around you and seeing what they are doing with their Funko products.  Now this might be entirely related to my area but I have noticed the reduction in the number of Funko products in my local stores.  Target had a bunch of stuff on clearance in their stores and have very little to pick from during my last visit. My local comic shop is talking about only ordering what a customer request or doing preorders related to Funko PoP! figures.  I have 5 Walmart locations within 30 mins of my house and, while they never really stocked a lot of stuff and the exclusives were always late to come in, the amount of stuff they have has dwindled as well.  Heck even Walmart.com is cutting prices on their Funko PoP! figures.

Now you may be asking where am I going with all this.  Just last month Funko went public with it’s IPO on the stock market and right out the gate we were seeing issues.  Funko had planned to sell their stocks in the $14-$16 range and just before the market opened they reduced that down to $12 a share.   By the end of the day, Funko was barely treading the $7/share mark.  It’s considered by many to be the “worst first day return for an IPO in 17 years”.

This week Funko released their 3rd Quarter Reports.  Below you can see the “highlights” and you can go Here to read the full details they had to report.  I haven’t had the time to read through it all nor do I know if I would fully understand all they are reporting. 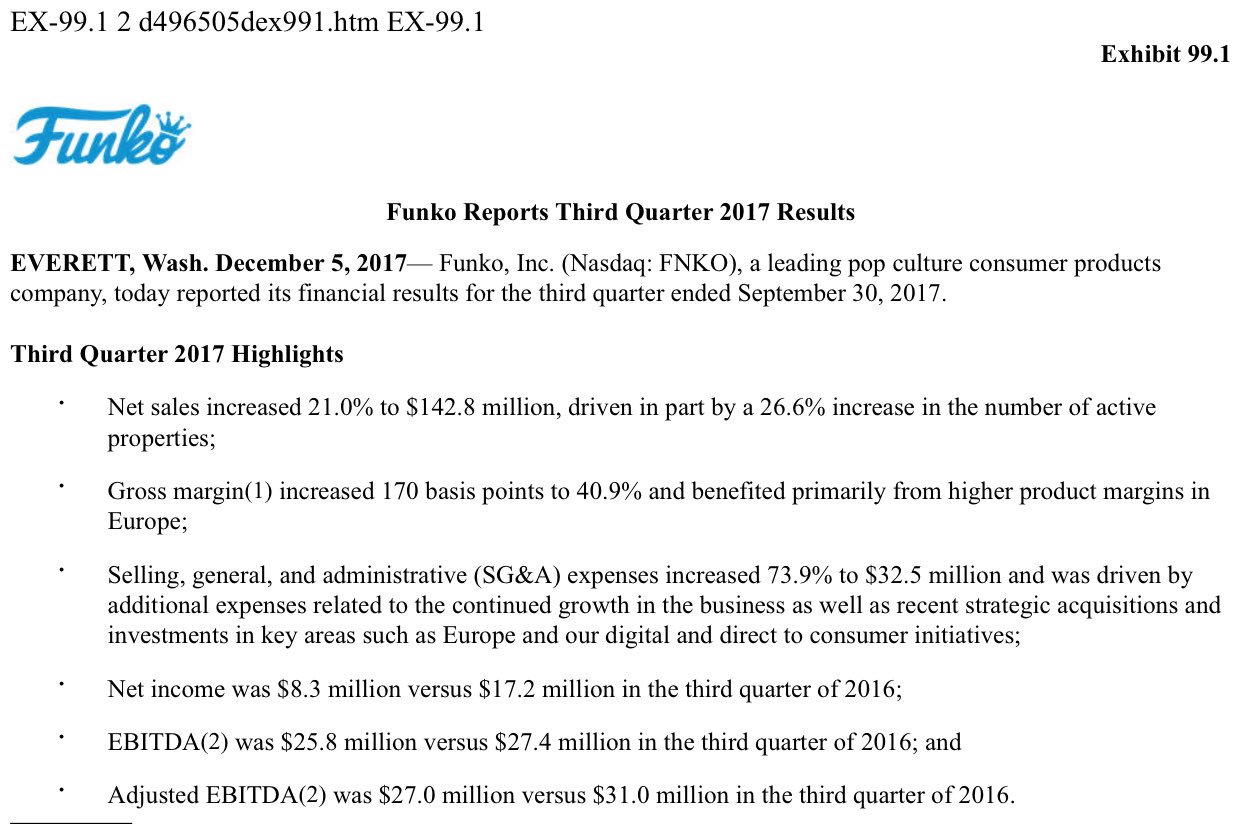 So here is what I pulled from the “highlights”.  They start off talking about their “26.6% increase in the number of active properties” and “gross margin increased…” and lastly their “SG&A expenses increased….driven by…..continued growth…..strategic acquisitions…..key areas….” All this seems great and dandy but then you start looking at the net income and the other figures they just don’t add up in my opinion.  None of it adds up to all these “great investments” and doesn’t appear to be “growth” to me.  Maybe it’s the old saying where you have to spend some to make some. But this all leads me to wonder if Funko is over reaching their pull and saturating the market a bit too much.

I guess we will have to wait and see what’s in store for Funko.