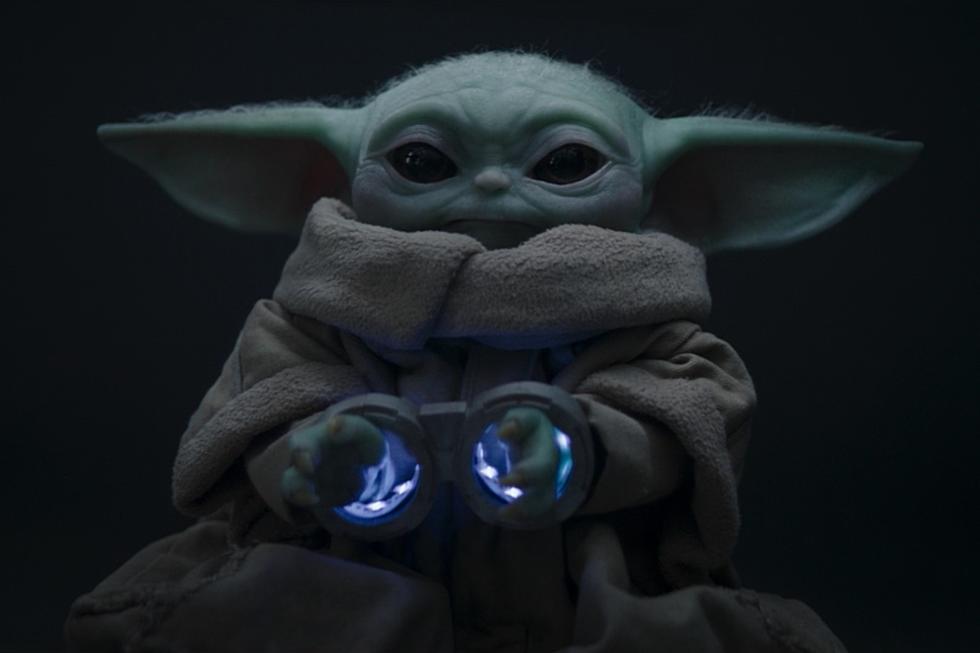 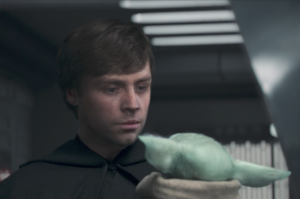 What can I say? Expectations exceeded.  Dopamine Dump.  Nostalgia bomb.  The Mandalorian season 2 has come to an extraordinary end.  The episode The Tragedy left us anxiety filled and teary eyed after seeing our beloved Grogu captured by Moff Gideon’s dark troopers, wondering if we would see him back in Din’s arms before the end of the season.  Mando showed his determination to save the child by forming a crew with some of the galaxy’s best allies: Bo Katan, Koska Reeves, Boba Fett, Cara Dune, and Fennec Shand.  The Mandalorian recruits Bo and Reeves after informing them Moff Gideon took Grogu.   Bo agrees to help if she can count on him to aid in her journey to take back Mandalore.

The bad batch of warriors organize a rescue plan.  The crew hijacks an Imperial shuttle with Dr. Pershing on board, who holds information of Gideon’s ship and dark troopers.   The crew then poses as empire filth being attacked by Boba Fett’s Slave One, in order to be accepted onto Moff Gideon’s command cruiser.  The crew crash lands into the cruiser and immediately wreaks havoc on the battalion of stormtroopers.  Moff Gideon realizes what is happening and immediately orders for the dark troopers to be activated.   After drawing the attention away, Mando slips away and continues towards the bay that holds the dark troopers.  Din arrives just in time before the platoon of troopers exit the bay.  He closes the gates on the 3rd generation droids with the exception of one.  Mando finds himself fighting for his life against a single dark trooper.   All of Din’s attacks and gadgets seem to be useless on the heavy armored droid.  As the dark trooper seems to be getting the best of Mando, it meets its demise at the end of the beskar steel and its neck.  Mando then opens the space hatch of the bay that holds the remainder of the dark troopers.  They are all then sucked away from the ship and into space.

The Mandalorian then opens a door to a security room to find Moff Gideon holding the dark saber to a handcuffed Grogu.  The child perks up when he sees Mando.  Din and Moff begin a dialogue of the events that have just been displayed before them.  Moff mentions that Bo Katan is here to take the dark saber from him.  Mando explains he just wants the child and he does not care about the blade.  Moff Gideon then tells Din he can take the child and that he already has gained what he wanted from him, his blood.  The Mandalorian goes on to take Grogu and is struck in his beskar guarded back by the dark saber.  Mando now finds himself in a duel that we have never seen before, Dark Saber vs Beskar Spear.  Din proves his dominance and overcomes Moff Gideon.

The rest of the crew is at the bridge of the cruiser and are met with the doors being opened, revealing Din armed with the darksaber in one hand, holding Grogu in the other, and Gideon handcuffed.  Immediately, an angered and concerned look takes over Bo Katan’s face.  With Din’s ignorance to the history of Mandalore, confusion fills the room and him.  Moff and Bo seem to be the only ones to understand what has just taken place.  Gideon explains that with the result of his defeat by Din, he is now the rightful heir to the throne of Mandalore.  He goes on to tell Mando that the only way for Bo to rightfully rule is to defeat Din in combat.  The conversation is quickly ended by the notice of multiple unknown targets boarding the cruiser.  It is the dark troopers attempting to finish their programming of killing everyone and protecting Moff Gideon and the child.

All hope seems to be abandoned as the platoon of droids march to the gates of the bridge and slowly but surely pound the gates down.  The crew then notices one single x-wing boarding the ship.  The dark troopers cease their attempt to enter the bridge.  Grogu comes out of his daze and turns to the security cameras that show a hooded figure.  The unknown man is armed with a lightsaber and calmly marches towards the dark troopers.  The man is met with a filled hallway of droids, he ignites a green lightsaber from a very familiar hilt, and continues on to obliterate the armored bots.  Slicing, force pushing, force pulling, and force crushing his way through them, he finds himself at the bridge.  The Mandalorian immediately seems to understand this is the Jedi that heard Grogu’s call from Tython.  He orders the crew to open the door.  We are then met with a Master Jedi, Luke Skywalker.  Luke reaches out to Grogu and calls for him.  Grogu seems to resist the calling.  Luke informs Din that the child is waiting for his permission to leave him and pursue his training.  Din allows him to go.  As they are saying their goodbyes, Mando promises they’ll see each other again.  The child reaches and touches his helmet gently.  The Mandalorian seems to understand this silent request.  He then removes his helmet and reveals his face to Grogu for the first time.  Grogu touches his face as Din sheds a few tears.  The child then woddles toward Luke and R2-D2.  The episode ends with Grogu and Din locking eyes as he leaves.

The conclusion of the season was fantastic.  Worlds colliding together and intertwining.  The journey of one of the galaxy’s best bounty hunters and his quest to protect a force sensitive child has been met with the world of a prime Master Luke Skywalker.

Check out our Facebook page and we’d greatly appreciate a like and a share!  Don’t be afraid to start a conversation with any of us on the Facebook page or to give any constructive criticism!

Thanks and may the force be with you!

One thought on “*SPOILERS* The Real Rise of Skywalker!”