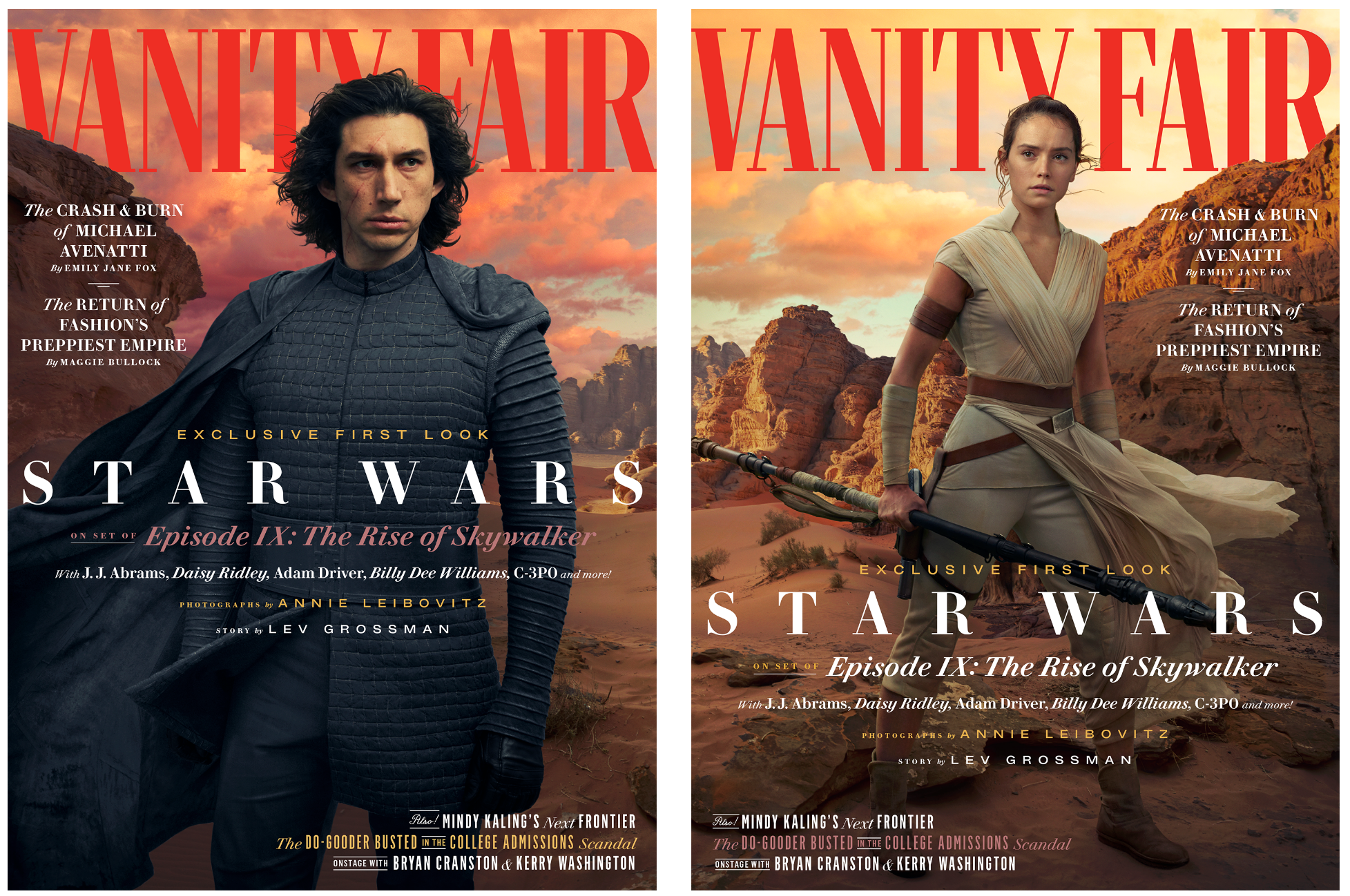 Ever since last month’s Star Wars Celebration, fans have been waiting for the next big news drop in the time line ticking down to Episode IX: the Vanity Fair summer issue. Rumors have been circulating it was going to drop information about the new characters that will be appearing in The Rise of Skywalker for the first time, and it did not disappoint. It also took the time to set up the mindset and what we can expect from our familiar band of heroes and villains.

–Jannah, played by Naomi Ackie, is described as an ally of Finn’s who leads the charge against the First Order on top of an orbak, which looks like a mix between a stallion and a very fuzzy warthog.

-Richard E. Grant is part of the First Order, as many have suspected. He is pictured alongside General Hux on the bridge of Kylo Ren’s destroyer. He’ll be playing the character of Allegiant General Pryde.

-Although many have speculated that Matt Smith will appear in the film, he is not mentioned in the article. Emperor Palpatine isn’t mentioned either, leading some fans to speculate that he will be playing that role.

-The Knights of Ren are described as, “masked warriors with specialized weaponry who add an element of chaos to the war between the Resistance and the First Order.”

-It’s still unclear whether or not these were former students of Luke’s who turned to the dark side along with Kylo Ren when he destroyed Luke’s training academy.

-Their outfits are described as “vicious.” They have mismatched armor sets, and one is mentioned to have a “lethal-looking gun arm” like something out of a Mad Max film.

-They seem to have an altercation with Kylo Ren: “In the first trailer for The Rise of Skywalker, we see Kylo Ren mowing through the knights with his lightsaber. Is this a flashback to a previous falling-out? Evidence of new dissent among the ranks? Or is it, as many hope, evidence that Kylo will turn on the bad influences in his life and join Rey in the light? We’ll find out when The Rise of Skywalker opens in theatres December 20.” UPDATE: An update to the article took down this paragraph, stating, “An earlier version of this article mischaracterized a scene including Kylo Ren and the Knights of Ren.” So was it an honest mistake or a leaked spoiler? It seems up for fans to decide until the film debuts in a few months.

-There are two new planets. One is a desert planet called Pasaana where the Aki-Aki race lives. These are the robed aliens with long faces seen in the trailer clip. The other is a snowy planet called Jijimi, where Keri Russell’s character, Zorri Bliss, is introduced.

-“Sources close to the movie say that Skywalker will at long last bring to a climax the millennia-long conflict between the Jedi Order and its dark shadow, the Sith” further hinting at Palpatine’s involvement.

–The Rise of Skywalker picks up “about a year” after the events of The Last Jedi.

-The film is going to explore the origins of the First Order, although it’s not clear if there is a specific scene devoted to this or if it’s something simply brought up in passing.

-Adam Driver describes his possible Force bond with Rey in slightly more detail: “And then he had been forging this maybe-bond with Rey, and it kind of ends with the question in the air: is he going to pursue that relationship, or when the door of her ship goes up, does that also close that camaraderie that they were maybe forming?”

-A source close to the film also elaborates more on the link between Rey and Kylo Ren, saying “their Force-connection will turn out to run even deeper than we thought.”

-Driver also elaborates on Kylo’s upbringing, caught between two parents that were more interested in their careers (smuggling/rebelling) than him: “How do you form friendships out of that? How do you understand the weight of that? And if there’s no one around you guiding you, or articulating things the right way … it can easily go awry.” The article also mentions that Kylo has yet to have a moment of self-discovery, which is something that might happen in this film.

-Daisy Ridley likes the opening shot of the trailer shown during Star Wars Celebration “because I think it’s quite a good visual representation of where she is now: confident, calm, less fearful.… It’s still sort of overwhelming, but in a different way. It feels more right—less like inevitable and more like there’s a focus to the journey.”

-It’s mentioned that Rey’s training is nearly complete, although it doesn’t go into much more detail about whether or not she’s guided by any Force visions from Luke or Yoda

-John Boyega describes himself as an active member of the Resistance, having decided who to fight for

-The article hints at possible romantic attraction to Rey or Rose, intimating that Rose might be a better match for him romantically

-Oscar Isaac reveals that there has been a “bit of shared history” that we haven’t seen. Although Poe’s been mostly on his own in the films, it seems that Poe has been going on missions with Finn and Rey before the events of this film, as they have “a much more familiar dynamic now.”

-Black Squadron is not mentioned at all, although we did see a shot of Snap Wexley on a jungle planet in a teaser photo shown during Star Wars Celebration.

–In a separate article, Oscar Isaac also mentions that Finn is Poe’s “family.”

-Anthony Daniels, who will have played C-3PO for nine films, reveals that he didn’t get the script until right before shooting started, and he had trouble memorizing his part. His first line, “common emblem” was something that he simply couldn’t pronounce. It gives fans a brief glimpse into C-3PO’s first line of the film, although it’s unclear what “common emblem” means or if that line will be changed in the final cut.

-Anthony Daniels says that C-3PO will also have a moment that will “surprise everyone” but it’s up for fans to speculate as to what that might be.

-Although playing coy about her involvement in an earlier interview, Billie Lourd is confirmed to reprise her role as Lieutenant Connix. They filmed around the late Carrie Fisher’s unused scenes, re-creating the lighting the way Carrie had been lit. There are moments where Connix and Leia are talking and touching. As JJ describes it, “There are moments in this movie where Carrie is there, and I really do feel there is an element of the uncanny, spiritual, you know, classic Carrie, that it would have happened this way, because somehow it worked. And I never thought it would.”

-The article opens with Disney executives talking about how important it is to “event-ize” Star Wars, to give the films more meaning than what you would expect from just another film dropped into the pool of the Marvel franchise. Disney didn’t just buy a franchise, it bought a fanbase, and it seems they want to give Star Wars the same respect and passion that fans hold for it.

J.J. Abrams seems to feel the same way. Although he admits that he threw a little more caution to the wind in this film, rather than abiding by the “formula” that tossed a good amount of criticism his way following The Force Awakens, he set up a small town in Jordan and built miles of road in the desert in order to pay homage to the way the first film was shot and keep the experience as real as it could be. Oscar Isaac, who plays Resistance pilot Poe Dameron, describes how he arrived in Wadi Rum to see a massive greenscreen set up in the middle of the desert. While CGI still has its place in the franchise, actually filming on location helps it feel more real.

-J.J. compares the rise of the First Order from the Empire to the Nazi party: “It was almost like if the Argentine Nazis had sort of got together and actually started bringing that back in real form.”

-JJ touches on what he wants the trilogy to represent: “This trilogy is about this young generation, this new generation, having to deal with all the debt that has come before. And it’s the sins of the father, and it’s the wisdom and the accomplishments of those who did great things, but it’s also those who committed atrocities, and the idea that this group is up against this unspeakable evil and are they prepared? Are they ready? What have they learned from before? It’s less about grandeur. It’s less about restoring an old age. It’s more about preserving a sense of freedom and not being one of the oppressed.”

-Kathleen Kennedy talks a little bit about how these films differ from the original Star Wars films: “There’s a loss of innocence, a sense of innocence that existed in the 70’s that I don’t think to any extent exists today. I think that has to permeate the storytelling and the reaction to the stories and how they’re set up. It has to feel differently because we’re different. Evil needs to feel and look very real, and what that means today may not be as black-and-white as it might have been in 1977, coming off a kind of World War II sensibility.”

-For a look at all the photos shot by Annie Leibovitz, click here to see the Vanity Fair exclusive photos.

So what are your thoughts? Which new character are you looking forward to meeting the most? Let us know in the comments below and make sure to pick up your copy of the summer issue of Vanity Fair, which will be on newsstands in New York and Los Angeles on May 30, and nationally on June 4.

2 thoughts on “Your Episode IX: The Rise of Skywalker Vanity Fair Cheat Sheet”